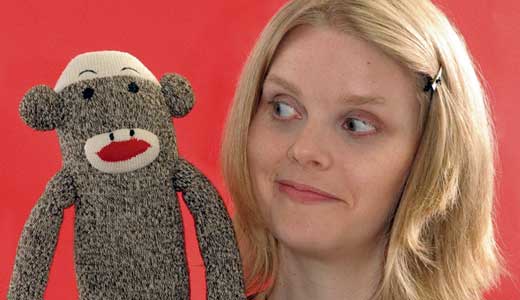 Admit it, when no one else is around to listen, you talk to your cat as if he’s a person, because even though he’s an asshole and never wants to cuddle, he won’t tell you your hopes and dreams are stupid. Performer Amanda Rountree, who is vegan and likes to use analogies, doesn’t have any pets, but she does have some plants and a few sock monkeys with which she converses regularly. The Louisville native, now based in Chicago, admits she’s a chatty Cathy. “I do talk to myself a lot,” she says. “In fact, I mention that in my show.” In her current one-woman piece, “The Good, The Bad, and The Monkey,” she confides in her silent stuffed friends while the audience listens.

“It originated from a 10-minute solo piece I did,” Rountree explains. “I thought it would be funny to be onstage with a stuffed animal, an inanimate object, and talk to it. I had this sock monkey a friend had given me years ago for good luck. I started performing with it.” Audiences really seemed to dig the sock-monkey acts, and would ask her if she had any more of them, or if they were part of a larger work. She decided she had to keep it going. She enlisted the advice of director Jen Ellison, and with her help, she wrote more material and crafted a full one-woman show. She now has three monkeys — Erin and Lisa, who act as her BFFs, and then a nameless male, who represents her boyfriend. This project is the first of its kind for her; she’s focused most of her theater career on improvisation.

“I started taking classes in ’89 at Walden Theatre,” she says. “I remember that whole day on Friday preceeding the class, I would just be so nervous. I was a little ball of nerves. But I stayed with it. There was something about it I just really liked.” Three years later, she would audition for Louisville’s only improv group at the time, The Reactors, who performed at what is now Comedy Caravan, formerly the Funny Farm.

“When I first auditioned for them, they just said, ‘Come back next week,’ and I was like, ‘OK!’” she recalls. “And after about five weeks of this, I asked one of the members, ‘Am I still auditioning?’ And he was like, ‘No, no, you’re in.’ Cause they never told me!”

She stuck with the group for several years and then moved to Seattle where she was a member of two improv troupes — Unexpected Productions and Playback Theater Northwest — working as a performer and instructor until she moved to Chicago in 2007.

“It was really good training for me,” she says. “That’s why I ended up staying in Seattle for so long, other than the fact that it was a beautiful city and I made lots of wonderful friends there. I was with these two really, really great companies who were feeding me artistically.”

But she decided she needed to stretch herself and live closer to her family, so she made the grand move to the Windy City, where she’s settled into teaching acting at Second City and Lifeline Theatre, spending the rest of her time performing both solo and with a group called WNEP: What No One Else Produces.

“Chicago is inundated with improvisers,” she says. “You can’t really throw a rock without hitting an improviser. I wouldn’t necessarily suggest throwing rocks anyway.”

Rountree is pumped about bringing her show and her monkeys to Louisville, and says she can’t wait to visit her family and friends and hit up some of her favorite spots, including Ramsi’s and Zen Garden.

“I love me some Ramsi’s,” she says. “I can’t wait to find out what their soup of the day is. I asked them one time for their recipe for the 21 Bean Kingdom soup, and they looked at me like, ‘You have to be joking.’”

She admits performing and teaching tend to consume her life, but she still tries to find time to cook, bake, paint, draw and go hiking. She also updates her blog once in a while. Some of her best analogies are up there, including one that sums up what she does quite well: “Improvising isn’t about pulling something out of your ass. It’s about pulling something out of your heart. The audience knows the difference. And they’d prefer not to watch something that smells like ass.”

‘The Good, The Bad, and The Monkey: Singlehood, Dating, and the Search for Something Real’
Saturday, Aug. 14
Bunbury Theatre
604 S. Third St.
www.bunburytheatre.org
$12; 8 p.m.