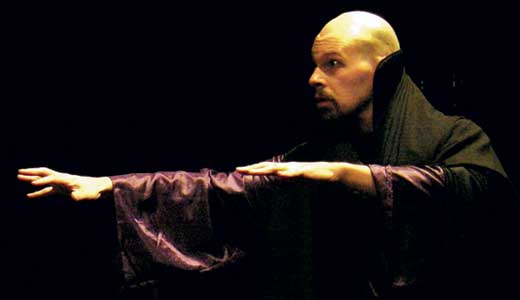 Le Petomane Theatre Ensemble has distinguished themselves from many of the companies in town because of their distinct style and commitment to comedy — physical comedy at that. The company continues to do work that highlights their originality and sticks to the mission statement — the shorter version: “Comedy allows one to do all sorts of deeply sneaky things for/with/to an audience. And physical comedy is even more fun and even more challenging.” They’re good at what they do.

Their latest production, “Ka-Blam!,” is about the return of Captain Ka-Blam!; his nemesis, The Fearmonger; their respective sidekicks, Kris and Psycheout; and intrepid reporter Carol Cooper. It uses the cast’s talents for physical comedy without sacrificing wit and comic timing.

The show itself is tricky. The setup is that the audience is attending a convention for the “Ka-Blam!” comic series. It’s a unique premise that works well to a certain extent, but at times the show feels a bit like an inside joke — one the audience may not always be privy to. I couldn’t help but wonder if those audience members laughing the loudest (and the audience laughed throughout) had grown up with a deep adoration for comic books or action heroes, and if that’s the ideal audience for the show.

That said, “Ka-Blam!” is a lot of fun thanks to the talents of the ensemble who created the show (Kyle Ware, Gregory Maupin, Abigail Bailey Maupin, Kristie Rolape, Heather Burns and Tony Dingman). I wish I could have peeked in on the rehearsal/creation process. As an ensemble creation, there’s no specific writer or director, which makes the well-balanced staging and timing of the show a major achievement for this group effort.

Le Petomane strives to make their work both artistically and economically accessible, which they’ve accomplished with this production. There is no set, and the props, for the most part, are children’s toys. But this minimalist background helps to highlight the costumes by Jayme Thomas and Karen Ware. In particular, the costume of Carol Cooper (Rolape), which subtly changes with the times, is fun to watch.

Le Petomane seems to have acquired a cult following in this town, and they deserve it. “Ka-Blam!” has been their most requested show since 2006, and this season’s run-through does it much justice. They’ve created many great moments in this show, and no doubt everyone will leave with a favorite.

As always, Le Petomane continues their sliding-scale ticket prices ($8-$20), making it possible for theatergoers of all income levels to see their shows.