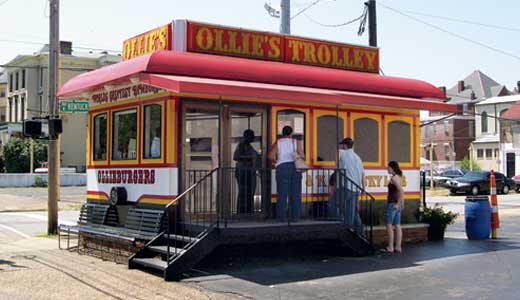 The Ollie Burger is the stuff of legend: Thick, juicy, spicy and unique, it is available from only one place in Louisville these days, and a handful of places on the planet. That said, I learned that eating more than one of these delectable mouth-gasms in a single day might not be a great idea.

Let me start from the beginning.

I hadn’t had an Ollie Burger in years. Then recently, my friend Amy talked me into meeting her for lunch at Ollie’s Trolley, located downtown at Third Street and Kentucky. The tiny trolley-shaped shack is the last of its kind in Louisville, and the burgers — topped with a slice of mozzarella cheese, inside a bun slathered with a Thousand Island-based sauce — are as delicious as they were in the 1970s. The French fries, which are shaken in Ollie’s spice mix, are just as good.

The late Ollie Gleichenhaus was a legendary grouch who was particular about his burgers. Former Kentucky Gov. John Y. Brown, who had done quite well with his Kentucky Fried Chicken concept and made “Colonel” Harlan Sanders a legendary figure, tried to do the same with Ollie, who ran a tiny burger joint in Miami Beach. Ollie’s top-secret spice combo reportedly includes 32 ingredients, and Brown believed it was the burger version of the Colonel’s chicken recipe. The story didn’t end quite the same for the Ollie’s franchise, but a few of the Ollie’s Trollies have hung on, including locations in Cincinnati and Washington, D.C.

When I recently dined at the Louisville Ollie’s with Amy, her son Davis and his friend Jackson, the delicious burger and fries brought back a flood of youthful memories. These spices, these burgers and fries, are just … well … perfect somehow. Jackson even went so far as to proclaim Ollie’s food to be “like being naked in a pool of kittens.” (Give him a break, he’s just a kid.)

My lunch experience, which cost a measly $6, prompted a Google search for more info about Ollie’s. Turns out there are a number of people across the country pining for this stuff after years of deprivation. There is even a black market of sorts for recipes that purport to reveal Ollie’s secrets. One of them has only about 15 ingredients, including both Heinz 57 and A.1. steak sauces. Um, no.

But I struck gold when I found a retired executive from Lum’s restaurants, which served Ollie’s burgers and fries back in the day. Dennis DeBlasis, who was a director of operations for Lum’s, doesn’t know the recipe himself, but he still has access to the spice mixes, and he sells them for $10.95 per pound via his website (www.lums-recipes.com). He assured me the other recipes I found online were bogus.

“Anyone who states they have the recipe is dreaming,” DeBlasis claims. “John Y. Brown created Colonel Sanders and also Ollie’s (restaurants). The spices and recipes are not known to the public.”

He noted that all restaurants that served the Ollie’s burgers and fries bought the spices from a single distributor in 1-pound bags — which is what he now sells. “This is the closest anyone’s come to the original (spices) as designed by Ollie,” he says.

So I decided to see for myself. I bought his spices and recruited Amy’s help, and together we made Ollie’s burgers and fries for dinner on a recent evening. And it’s true — the spices I bought from DeBlasis, so help me, taste just like the real deal.

It’s not a difficult meal to make — mix the burger spices with water to create a marinade, and add them to Thousand Island dressing to create the bun sauce. Marinate the burgers, cook, top with mozzarella on a bun slathered with the sauce, and guess what? MOUTH-GASM. And as for the fries? We baked instead of fried (slightly healthier), then simply shook the hot fries in a large bowl with the spices (use lots for a greater kick). We melted as we devoured our delicious dinner. If, God forbid, Ollie’s downtown ever closes, we’re set.

But getting back to my original point: To ensure I had the proper perspective for comparison, I had Ollie’s for lunch the day we made the burgers. You know, for research purposes. However, two Ollie Burgers and a couple of potatoes’ worth of extremely spicy Ollie’s fries within seven hours of each other is not something I recommend. Sadly, even something as good as Ollie’s should be enjoyed in moderation.

Therefore, my next experiment is to see if the drug store brand of Alka-Seltzer is just as effective as the real thing. And if so, can I make it at home?