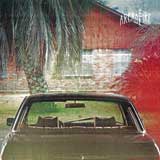 Over time, hype machines leak oil and lock up. On Arcade Fire’s third, you’ll decide whether you like this band forever, or were drunk on superlatives. Buoyed by a majestic live show, the band’s in-studio methods are no less impressive, but their grandeur would’ve dulled after Funeral if not for rock-solid arrangements and singularity of purpose. On Neon Bible: humans’ struggle with religion. On The Suburbs: class strife — think Prospect vs. Iroquois Homes — and the disconnections between our personal reality and what transpires outside of it. Musically, they Super Glue one song to the next. “Ready To Start” follows their pattern of letting track two rev the engine, and there’s an eloquent thread that ties the woozy strings of “Rococo” to the opening chords of “City With No Children.” Much like a theater pit band, they interpret life onstage.