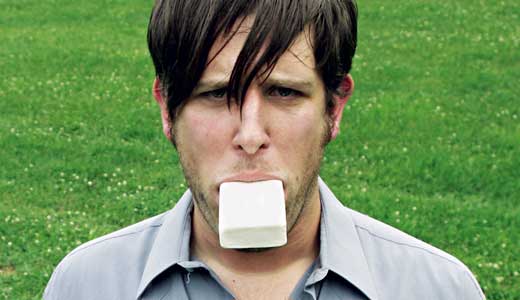 He washes his own mouth out: James Jackson Toth and what appears to be soap.

Only a fraction of the 72 songs James Jackson Toth brought to his recording session made it onto his forthcoming record, and producer Michael Gira made Toth justify every one of them.

Shooting pool with his soon-to-be in-laws in Key West, Fla., Toth, who performs under the name Wooden Wand and now Wand, admits he was immature. This recording was about submission. About needing an editor. About stretching and testing his gifts. About knowing that, even after several critically acclaimed albums, Toth didn’t know everything. Maybe he knew nothing at all.

“On this record, more than any other, I was willing to submit to the idea of being produced,” Toth admits. “I find the studio environment really tedious; I can be kind of hard-headed.”

Pot, meet kettle. Gira would pause mid vocal-take to ask Toth if that chorus was right. Did he believe in what he was singing? Was it the truth? Was it any (gulp) good?

Toth has no regrets. He wishes he could reverse the clock and climb onto Gira’s crucible sooner. He could’ve saved himself the boot camp. “He’s the last of a dying breed,” Toth says. “He scrutinizes things I take for granted. He’s not watching the clock in the studio, that’s for sure.”

The Eli Young Band is four college pals who cut their teeth playing the R Bar, near University of North Texas. They ventured out into other parts of Lone Star HQ, into Oklahoma and the Southeast without tour or radio support. That changed in 2006, when radio program directors stumbled onto their single, “When It Rains,” and put it in rotation. That buzz earned the attention of Universal and fellow country musician and friend Miranda Lambert.

For their latest album, the band returned to Dark Horse Studios in Franklin, Tenn. The as-yet-untitled record is 15 songs deep and plays upon their circular thinking — as in, get in a circle and write.

“We’ve always been country fans, but we never started out to be one kind of a band,” says drummer Chris Thompson. “The tricky part about that is we all come from different musical backgrounds; we got into the studio and cut our records, and let ourselves have our own artistic freedom.”

The band still keeps in touch with Lambert. “She definitely gives us more advice than she did when we first met her,” Thompson says, laughing.