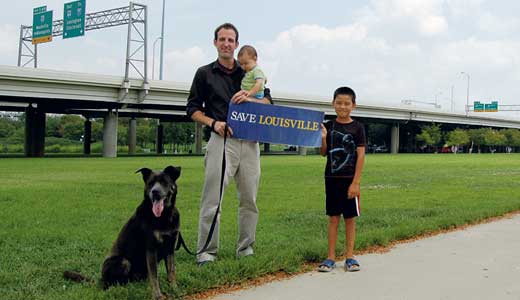 Stu Noland didn’t set out to beat City Hall; his hand was forced.

The 31-year-old Phoenix Hill activist didn’t expect to be arrested and handcuffed in June for chalking a downtown sidewalk near the Jefferson County Judicial Center, where he sat in Judge Jennifer Bryant Wilcox’s district courtroom Monday morning.

“Are you nervous?” I asked.

“Not really; I just don’t wanna pay any money,” he replied.

“Have you chalked since you were charged?”

“Yeah, a couple of times,” he confessed remorselessly.

Noland, the founder of Save Louisville, can’t resist relapsing. He deems the downtown portion of the Ohio River Bridges Project “the biggest urban planning mistake of the 21st century” and, for its capacity to crush commerce, “a fire-breathing demon from hell that kills babies.”

“I’ll go back to chalking on the down-low” so that Louisvillians will “constantly be reminded that people are against this,” he whispered, stressing the importance of being “ubiquitous” in messaging.

At a Bridges Authority meeting in early May, Noland became somewhat of a folk hero among project critics for a sizzling speech immortalized on YouTube (courtesy of Hillbilly Report).

It began with a wry welcome “to the bankers from Goldman Sachs that are gonna help us figure out how to pay for this $6-$8 billion dollar project.” (Years ago, its cost was estimated at $4.1 billion, with construction set to begin in 2008, but mega-projects “never stay on budget,” he said.)

He then cited a sanitized rendering of the proposed Spaghetti Junction and the ravages of its redesign: “The Great Lawn will feature the only elevated riverfront expressway to be expanded in the world — ever. This, at a time when most cities are removing them. This section will be 75 feet wider and considerably taller,” thus casting a broader shadow.

“The Kennedy interchange will become a massive, quadruple-stacked, Los Angeles-style interchange on Louisville’s image-defining waterfront,” he said. “Our award-winning Slugger Field will now have on-ramps right outside the outfield stands.”

After detailing three alternatives, including 8664, an innovative highway reduction plan to reclaim the waterfront, Noland said, “Yes, folks, it is possible to build a road that both moves traffic and is not hideously ugly. … Louisville will fail if we adopt” the project on the table.

Noland also spoke of sponsoring a survey that allows urban planning professors nationwide to weigh in on the Ohio River Bridges Project (responses to be published on his website, www.SaveLouisville.net). “If less than 75 percent of the respondents agree with me that this design will be bad for the long-term economic health of our city, then I will drop my campaign,” he said.

Meanwhile, he’s circulating petitions already signed by hundreds of area residents who intend to relocate if the project is realized.

“We are going to stop you from destroying a great city,” Noland told the bi-state authority as the audience applauded.

Fast-forwarding to the courtroom, Noland’s lawyer, public defender Jane Tyler, summoned him outside for a briefing: “Do you wanna have five hours of community service or would you rather pursue this?” she asked. “Because I know you’re vested in this” as a matter of principle.

Noland was confident he hadn’t broken the law. As LEO Weekly reported in June, the criminal mischief ordinance under which he was cited addresses graffiti applied with paint, indelible ink or acid — but not chalk.

He was no guiltier than youngsters chalking a hopscotch grid on a public sidewalk.

But to pursue it meant a jury trial and the risk of a $250 fine, according to Tyler.

As a matter of risk management and convenience, he took the deal.

While awaiting the official disposition of the case, however, Noland expressed second thoughts or maybe just fantasized: “It would have been a fun jury trial – damn!”

Nevertheless, the charge — a class B misdemeanor — is dismissed pending the completion of community service, which already is his routine passion. He started and services nine recycling stations in the Uptown/Nulu area.

And to the extent that “Chalk Man” Noland has learned a lesson in discretion, this may conclude only his opening statement.