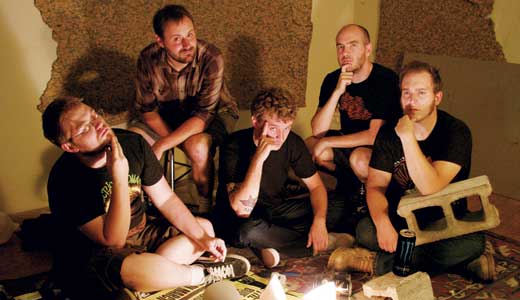 Lee Van Cleef had a better time recording its new album than its 2007 debut.

Recording sessions for their 2007 debut, The Gentleman’s Punch, started in haste because original guitarist Eric Young was leaving town. The band laid down the basic tracks in a cold attic space with zero insulation on Seventh Street Road. Three of Bishop’s guitar amps blew, and his eight-track short-circuited.

“We realized the bass drum was not on some of the songs, so the kick drum had to be cut and pasted on each song to match,” Bishop says. “It was a comedy of errors.”

For the recording of Terror Blood, the band entered Studio K with engineer Trip Barriger. No blown amps. No subzero temps. “The contrast between the two is ridiculous,” Bishop says. “We had an opportunity to take more consideration into what we were doing. If we didn’t like something, we’d just re-record it, so it was actually like recording an album.”

Featuring much of the lineup from the louder, more abrasive Teen Pregnancy!, Lee Van Cleef’s material is more dynamic, subtle and textured, with a required amount of cheek. The artwork of Terror Blood depicts all the members in childhood Halloween photos. The 9-year-old child of one of Bishop’s co-workers came up with the album title.

“I think that’s a better band name than I’ve got,” Bishop says, “and that’s only something a 9-year-old can come up with.” Hey, a 5-year-old named Google.

Hello Dolly
Fans of early No Doubt, The Go-Go’s and grrl punk that’s as sweet as it is snotty will feast on The Dollyrots. They arrive Saturday at Phoenix Hill Tavern (644 Baxter Ave., 589-4957). The Clicks and Hunter Valentine open. Cost is $10.