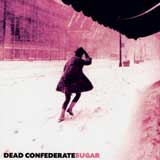 Sideways pop reckonings come naturally in Athens, Ga., after all. It’s a hub of Elephant 6 and longtime HQ for R.E.M. Next to these, Dead Confederate is the burly, trucker-hat wearing, glad-handing cousin who uses distortion as his chief narcotic. Conceived during a New Jersey blizzard, Sugar has its own dynamic moments, but they are hard to latch onto because of the album’s frequent return to big, bigger, biggest, a tactic helped in no small way by appearances from shredder J. Mascis and strummer Ben Wigler. “In the Dark,” “Father Figure” and “Quiet Kid” drown under thick blankets of fuzz. It’s a strategy on the verge of repeating itself, until “Shocked To Realize” and the homespun kindness of “Run from the Gun” demonstrate a clear appreciation of restraint, allowing singers Brantley Senn and Hardy Morris to let their lyrical meanings shine.