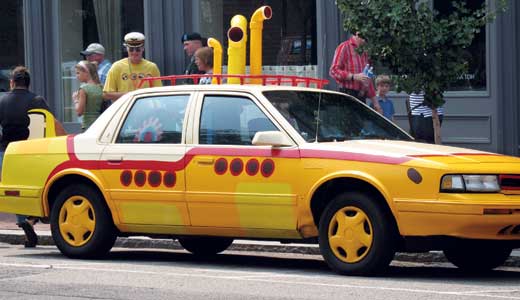 Black and white attire is requested at this year’s Art for the Animals fundraiser — a gesture intended to emphasize the color pets bring to our lives, says event chairwoman Kristi Cook. The Shamrock Pet Foundation hopes to raise $80,000-$100,000 through ticket sales and by auctioning the work of local artists. The event, now in its 14th year, features more than just cat and dog portraiture. Sculpture, pottery, jewelry and a spectrum of original paintings will be on the auction block. The $75 ticket price includes live music and refreshments from Bourbon’s Bistro, Ramsi’s, Blue Dog Bakery, BBC and Four Roses bourbon. Most importantly, a needy animal will be spayed or neutered with each ticket sale. Those wearing black and white will receive raffle tickets for special prizes. —J. Christian Walsh

Even on YouTube in the middle of the day, screechy strings, eerie lights and colors, spooky laughter and ghostly figures can generate the willies and make you think, if presented well. Derek Rake’s short film, “Gorgeous Oranges,” is an intriguing splash of surreal images, and it will premiere at Skull Alley on Thursday as the focal point for an entire multimedia performance piece. The project was created in honor of Rake’s mother and her battle with mental illness. The show intertwines film with theater and poetry to illustrate a surrealistic realm and to explore the reality of mental illness. Rake is a student at the Kentucky School of Art and has directed other local avant-garde performance pieces, such as the Big Top circus show in 2008. —Jane Mattingly

When battling rush-hour traffic, sometimes all the cars on the road start to look alike. So next time you’re cursing that Honda for cutting you off, take a moment to think about the artistry behind the auto. This week, the 9th annual Art Car Weekend will do just, with more than 40 original “art cars” from around the country parking in Louisville for three days. The family-friendly weekend includes a variety of events that culminate in a parade along Frankfort Avenue. Whether you’re interested in the art car-related drive-in movies at Waterfront Park on Thursday or want to take the kids to enjoy the hands-on workshops, there will plenty to see. Many of the art car artists will be available to talk about their cars and sell some of their original work. —Whitney Spencer

Jeff Lamb, aka Greasebat, is an artist who, like most, is infinitely humble. He describes himself as a guy who just “likes to draw messed-up junk, heavily influenced by Japanese monsters,” which you can certainly see in his work. But what he does not realize is that his most memorable and recurring character, the “Greasebat,” which looks like a Mothman with a tiki mouth and bat-style underarm dragon wings, is not just a high school doodle. To draw up and maintain a character in visual art is just as difficult as conjuring a character through writing. In true Ultra Pop style, Lamb will be displaying both 2-D painting and screen prints and 3-D physical action figure-type mini-sculptures of the Greasebat. I love seeing an artist find a character that recurs in their work. The best part: Lamb may not even know what piece of him this monster has taken. —Pawl Schwartz

Blues devotee Jenn Stout is happy to be here. As a teenager, she suffered from panic attacks and picked up guitar as a hobby while nursing a broken ankle. She cobbled together material in time for regular open mic intervals at Bearno’s and Highlands Taproom. She made a demo in 2003 under the name Jane Doe and an EP, Out On My Own, a year later. For Wrong About Me, which drops Friday, Stout went to Downtown Recordings and enlisted two cents from Matthew Blake (Lotus Blake) and Ashley Burchett. The seven songs bask in “raw emotion, anything from pissed off to love,” the 29-year-old says. Leigh Ann Yost and more join in. —Mat Herron

After trips with Amos Lee, Philly songwriter Mutlu Onaral is on his own, pushing a four-banger EP and Livin’ It, his album produced by dearly departed T. Bone Wolk (Hall & Oates). Born to Turkish parents, Onaral grew up in Center City, taught himself guitar and began showing up regularly at a club called The Fire. Eventually his laid-back soul caught the attention of Manhattan Records. Onaral left Manhattan after three years around the time its parent company, EMI, cleaned house. Now on the road, he says it’s simple: just him, a Gibson CJ165 acoustic guitar and new people every night. “I have a good thing going.” Joey Ryan opens. —Mat Herron

The musical about the endearing redheaded, Depression-era orphan will run as the entertaining culmination of Music Theatre Louisville’s “Camp Annie.” It’s a hard-knock life for the 103 orphan girl actresses who, after two weeks dedicated to choreography, music and acting, make their stage debut, furthering the mission of MTL to train and mentor youth in the arts. Group rates are available if you and at least 14 friends are at your bottom dollar. So hang on ’til tomorrow (or mid-August) and come to the show. —Rosie Haney

We in Louisville have an affinity for the Big Easy. To help celebrate that relationship, the Louisville Visual Art Association is getting the party started, Louisiana style. Anything called “Ragin’ Cajun” has to have great food, drink and music. LVAA does not disappoint, with Zydeco dance music by Lagniappe, Southern Comfort hurricanes and food from J. Gumbo’s. That’s just a few of the Nawlins’ specialties included in the ticket price.

The Louisville Visual Art Association is continuing its Food for Thought series with artist Vian Sora Tuesday at the Charlotte Price Gallery, catered by Café Fraiche. Internationally exhibited in England, Italy, Germany and France, Sora, a native of Iraq, recently moved to Louisville and exhibited her colorful, layered paintings at The Green Building this past spring. At her Food for Thought lecture, she will discuss her paintings, which are described as “figurative, character driven and woman centered,” as well as her sources of inspiration — “archaeology, music and literature.” Using texture, color and symbolism, Sora draws from the rich history and ornamental tradition of the Middle East, bringing her own fresh perspective to her cultural inheritance. Reservations are required. —Chelsea Gifford

In Jefferson County, if every cat had a home, there would have to be 45 cats per household. It’s this staggering statistic that Alley Cat Advocates deals with. The nonprofit works diligently to help curb the cat population by using humane methods like the coined “trap, neuter, release.” They host events like the Big Fix where people can bring in stray cats to be spayed/neutered by volunteer veterinarians. This year, more than 600 surgeries have been performed, and ACA touts an impressive 16,866 surgeries since its inception. Tuesday’s event is a fundraiser for the group featuring comedy and music. Comedians include Mark Parris, Paul Strickland, Adam White and Will Hardesty, with a musical lineup of R. Keenan Lawler, Joe Dutkiewicz, Eric Clark and She Might Bite. —Rosie Haney

The Black Keys are returning to Louisville to perform selections from their latest album, Brothers. Patrick Carney and Dan Auerbach dig this city: They’re from Akron, Ohio, which isn’t that far away. Once upon a time, Dan took My Morning Jacket drummer Patrick Hallahan around the United States and then Europe for Keep It Hid. Auerbach produced A Touch of Someone Else’s Class by Black Diamond Heavies, whose drummer, Van Campbell, lives here. Carney’s solo project is called Drummer, but he doesn’t play drums. But that’s beside the point. The Black Keys like their drums and guitars loud, and they don’t have a problem tuning in front of you. —Mat Herron

‘Landmarks Through the Viewfinder’

One thing that makes this area such a great place to live is the abundance of historic architecture. Photographs capture “what was” and, hopefully, “what still is.” That’s the idea behind Indiana Landmarks’ traveling exhibition, “Landmarks Through the Viewfinder.” The show includes both big and small structures, such as Culbertson Mansion, the Colgate Clock and Polly’s Freeze. The Carnegie has planned some free events (registration required) to go along with the exhibition: “Presentation on Preservation and Sustainability” with Duncan Campbell of Ball State University on Aug. 7; Family Fun Workshop on Aug. 14; and “The Built Environment, Continuing the Historical Record” with Bill Carner of U of L’s Photo Archives on Aug. 17. —Jo Anne Triplett