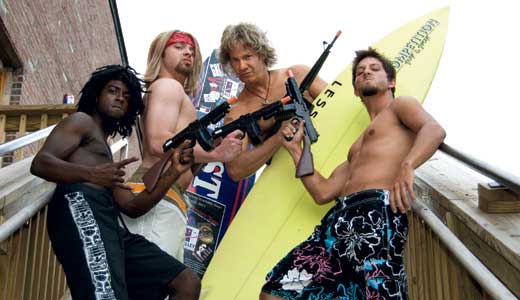 “When I first came out in ’90, and started traveling in ’92, they were terrified, horrified and upset,” said Suzanne Westenhoefer, one of the first openly gay comedians, in an interview with me last time she came through town in 2009. “And now, there’s a bit of a difference. I wouldn’t say that everybody accepts it. It’s not so shocking anymore. Even if people hate lesbians, they’ve seen them. In ’92 and ’93, they hated lesbians and they never even thought they knew one.”

Westenhoefer is eager to try out her new material at The Improv tonight in a show titled “Totally Inappropriate.” If it’s anything like her last jaunt on stage, nothing is off-limits. —Sara Havens

The harried camera crews you may have noticed scuttling around town last weekend were likely 48 Hour Film Project contestants. On Friday, teams comprised of 500 local filmmakers were assigned a genre, a character, a line of dialogue and a prop, then set off on a two-day scramble to complete their four- to seven-minute short films. The results of this movie mad dash will be screened on consecutive nights at Village 8 this week. Louisville’s top film will go on to the 80-city, international competition with a chance to show at the 2011 Cannes Film Festival. New to the local competition is a “best of” night (Aug. 14, 7 & 9 p.m.), which will feature winning shorts from the past five seasons. —J. Christian Walsh

It should be no surprise that this event is getting bigger every year. Anime has a posse, and no matter how small and isolated the early Japanese animation fans were, manga has proved to be a powerful ally in the fight to get tweens and teens to read. With events like Anime Con at the Louisville Free Public Library, this comic style provides a community of friends and conversation. This event has been divided into two: one for teens 12-19 and one for kids 5-11. Free anime screenings, a ramen noodle-eating contest (yum!), cosplay (short for costume role-play) and giant world-destroying robots with laser swords are all par for the course. Register online to ensure yourself a place at what is sure to be a four episode-long battle of a grand-ass time. —Pawl Schwartz

Bad news first: Keanu Reeves will not be visiting Louisville. I know. Dry your eyes, please, so you can read the good news clearly: One lucky audience member at each performance can have the experience of being not only a totally dreamy FBI agent who surfs, but also a brilliant movie star from one of the classic films of the ’90s. Don’t worry, there will be cue cards. But those not lucky enough to play Johnny Utah are promised a high-action experience, just like the movie — all of the skydiving, bank robberies, car chases, shootouts and surfing you could ever want — live! Ladies, it’s time to bust out those off-the-shoulder shirts. Additionally, each audience member will be issued a poncho. —Jane Mattingly

The picnic is the quintessence of summertime fun — fried chicken, deep-fried desserts, cold beer, beanbag tosses, pick-up soccer games, a little light gambling, and catching up with family and friends. Since 1850, staff members at the St. Joseph Children’s Home have been joined by alumni and volunteers to convert the grounds at the orphanage into one of the most revered picnics in the state. With booths peddling everything from Muth’s candies to handmade quilts from the Sewing Ladies, the picnic serves as the main fundraising event for the orphanage, which is home to nearly 150 children. There’s a reunion for families and alumni featuring live music Friday night from 5-10 p.m. —Rosie Haney

The folks at WAKY 103.5 are making it possible for local music lovers to relive the magic of some Louisville’s best rock bands from the ’60s and ’70s. The Louisville Zoo will host the Rock ’n’ Roll Reunion with one huge concert featuring acts such as the Butch Kaufman Band, Sherry Edwards and the Embers, The Epics, Crushed Velvet and more. Fans of WAKY will not only enjoy good music and familiar songs — legendary WAKY DJs also will join in on the fun. So bring a blanket or lawn chair, and then sit back, relax and enjoy the tunes. —Whitney Spencer

We’d still be sitting in dark silence if it weren’t for the inventive prowess of one of history’s most distinguished scientists, Thomas Edison. With 1,093 U.S. patents to his credit, his accomplishments have afforded us the luxury of light bulbs and machines that play music. Even if you’re a less is more kind of person when it comes to technology, Edison deserves his accolades. On Saturday, the Thomas Edison House hosts a benefit in honor of the strapping inventor. “Sailin’ On” is the theme for the evening, an idea extracted from a foxtrot released on Edison Diamond Disk records in the 1920s. There’ll also be a selection of impressive inventions from the educational outreach program, Invention Connection. Hors d’oeuvres and cocktails will be served. —Rosie Haney

Recession, ha! The visual arts continue to rise to the top with yet another gallery opening in Louisville. Co-owned by Paula Weyler George and Mary Le, Revelry Boutique Gallery is that time-honored mix of fine art and retail, local and regional, and emerging and established artists. “I wanted to open a store where a 20-something wanting to fill their new home with art could find interesting pieces they could still afford,” says Weyler George. “But it’s also a place where even the most discriminating art consumer can feel at ease. They can come to us and get something original, one-of-a-kind and hand-crafted by a local artist.”

The first exhibitions feature paintings by Mike Maydak and a ceramic installation by Emily Loehle. Both are on display through Sept. 30. —Jo Anne Triplett

Actors Theatre will follow in the tradition of the Beatles with The Late Seating at Actors Rooftop Concert on Friday. The Late Seating is an ATL series that features a mix of local artists in performance, music, arts and video. This one marks installment No. 4, and the “rooftop” aspect is a brand new twist, giving local bands a chance to crank up the rock while Mother Nature amps up the humidity. The concert will feature music by Armaedy, RedShadeBlue, The Pass and Straight A’s, along with work by local visual artist Patrick Jilbert and more. Past events have featured bands like the Deloreans, Adventure, I Am Is, Venus Trap and Ultra Pulverize, among others. A cash bar will be available. Music starts at 9 p.m. So climb up to the rooftop, and let’s hope they pass the audition. —Kevin Gibson

Growing up in Round Rock, Texas, Lewis taught himself guitar using the ones sold to the pawnshop where he worked, eventually performing at open mics. It wasn’t until Zach Ernst, then on the University of Texas concert board, needed an opener for Little Richard that Lewis’ career truly began. “I came across his first session years ago and was instantly a fan of his,” says Ernst, who’s now the guitarist for the Honeybears. The two wound up together for good after Lewis’ first backing band couldn’t fill a club date. Now into their follow-up to Tell ’em What Your Name Is, Ernst says every member’s more comfortable adding their signatures to Lewis’ garage soul blast. “Joe’s always in the front seat, but we don’t tell everyone what to play. We all kind of fit in together.” Hacienda opens. —Mat Herron

BeardSTRONG started out as something arbitrary that founders (and proud beard enthusiasts) Eric Bickel and Patrick Webb wanted to see on a bracelet. Soon, testicular cancer would hit close to home for one of their family members, and a cause suddenly seemed to make beardSENSE. “I’d like to sit here and spew out all kinds of data and facts about how testosterone levels ultimately create the link between beards and testicles,” Bickel says. “But in reality, the link is in something much bigger than physiology. It’s far more philosophical.” It made sense to team up with friend and comic Patrick Passafiume. A good cause and comedy show seemed like a match made in heaven. And once they booked the beard-rocking David Waite to headline, everything else fell into place. “Hopefully, anyone who wants to save their balls will show up,” Passafiume says. All proceeds go to James Graham Brown Cancer Center. —Brent Owen

It really is “hail the Louisville ladies” time. The Christy Zurkuhlen Gallery is exhibiting art made by local female artists. It’s a good companion to the “Women Imaging Women” show at PYRO Gallery.

The exhibit features 17 artists, including some local heavy hitters, showing mixed media by Caroline Waite, fiber art by grande dame Mary Craik and oil paintings by Cheryl Chapman. “I want to support the work of women artists and to give them another way to exhibit their work,” Zurkuhlen says. “Women artists have different problems when it comes to making art and exhibiting art than male artists do. I think that women have to work in an entirely different way. I would like to make it an annual event.” —Jo Anne Triplett