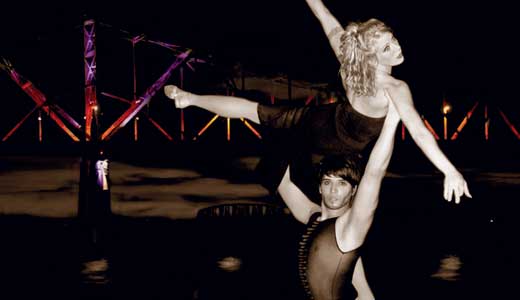 Ron Whitehead, that local polyhyphenate of art and culture, has good reason to celebrate his newest project. “The Storm Generation Manifesto and On Parting, the Wilderness Poems” is his 20th printed title. On Thursday evening, Whitehead will hold a reading and Q&A at The Green Building, home to indie publisher Holland Brown Books. Those who want to delve deeper into the unique workings of this acolyte of Beat masters and globe-wandering truth-seeker should definitely check out the limited-edition package of the new book — it adds a CD of a complete reading by the author, and, to top it all off, there’s a DVD of the reading with added interviews. —T.E. Lyons

What do you do when Marty Pollio comes to town? Prepare to laugh … that’s what you do. As a seasoned road comic, Pollio has played anywhere and everywhere, and has been on “The Tonight Show” (with Leno and Carson) and “Penn & Teller’s Sin City Spectacular.” He also appeared in the stand-up comedy classic “Punchline” alongside Tom Hanks and Sally Field, and had recurring roles on classic TV shows like “Night Court” and “Empty Nest.” Jeff Oskay and Lindsay Boling are also on the bill. On Thursday, Pollio’s show at Comedy Caravan is a benefit for Louisville Repertory Company, raising money for their upcoming 18th season. For tickets to that show, contact [email protected] If you miss the special show on Thursday, Pollio will be at the Caravan Aug. 18-22. —Brent Owen

Last time Joan Jett stopped in town, I was fortunate to land a meet-and-greet with her before the show. I was in awe of the rock icon and feebly stuck my hand out for a shake. She was genuine and reserved, yet she held a badass aura that shined on stage that night. I saw it up close and personal — she invited me and my friends to watch the Kentucky State Fair performance from the stage, her stage. It’s a night I’ll never forget, and my admiration for her has only grown with the recent film “The Runaways,” depicting the rise and fall of her first all-girl group in the late ‘70s. She returns to the fair Thursday night for a free concert — you’ll hate yourself if you miss it. —Sara Havens

Philadelphia death gospel magnate Adam Arcuragi has revivals on the brain. “Was it Blake or Yeats who said, ‘I must create my own mythology lest I be enslaved by another man’s’? That always stuck with me,” says Arcuragi, who’s at the Rud Saturday with a loose gang of affiliates. “When you say gospel music, you immediately think: American Southeast, early 20th century, little white church and people singing traditional hymns. The only thing we have in common, or at least the most palpable thing that we have in common, is that we’re all going to die.” His album, I Am Become Joy, is decidedly Andrew Bird-meets-cult-ceremony, but Arcuragi comes by it honest: His paternal grandmother played organ, and his uncle is a trained opera singer who toured with theater companies in the ‘60s. The American Freedom Machine and Sandpaper Dolls join. —Mat Herron

Banks of the Ohio

Back Door Slam and Delbert McClinton dropkick Madison Ribberfest into a new decade after nine years on the other side of the stream. That’s partially due to Slam frontman Davy Knowles’ preternatural chops. You can hear them free — arrive early — at WFPK’s Live Lunch Aug. 20, but realize his stomp is meant for open-air consumption. Three-time Grammy winner McClinton resurfaces with his first new studio set in four years, Acquired Taste, which featured backing vocals by the late, great Stephen Bruton. Tickets are $10 for Friday, $15 for Saturday and $20 for the weekend. No two-day wristbands will be sold at the gate. —Mat Herron

Reincarnated from a retired floating restaurant in Cincinnati, RiverStage now finds its home anchored at the end of Spring Street in Jeffersonville. With improvements to its operation and programming in recent years, the buoyed theater has brought in plays, concerts and musicals, and boasts a robust outdoor movie schedule. With the Louisville skyline as its backdrop, the site has established itself as a unique performance venue. The next show to grace the floating theater, “Hollywood Hits Live,” will only add to its rising reputation. Choreographed and co-directed by Alicia Corcoran-Scott, the singing and dancing show will feature popular music from 1935 to today. Bring a lawn chair, pack the bug spray and enjoy the free show. —Rosie Haney

Pack a basket for the third annual Slow Food Family Picnic at historic Locust Grove on Sunday. Walk, pedal, rollerblade or skateboard and receive free admission. The event will feature a cast iron cook-off, a best dessert with local fruit contest, live bluegrass from Whislin’ Rufus and two screenings of “Fresh the Movie” (noon and 2 p.m.). The new documentary celebrates figures dedicated to curtailing the industrial food chain. Will Allen, a Macarthur fellow and giant in the urban agriculture movement; Michael Pollan, a food activist and repeat best-selling author; and Joe Salatin, a holistic farmer and fixture in films like “Food Inc.” and Pollan’s book “The Omnivore’s Dilemma” are featured contributors. —J. Christian Walsh

The Louisville Bach Society opens its 2010-11 season Sunday with a late-summer concert of familiar classical choruses, plus an arrangement of the gospel song “Elijah Rock,” in a program at St. Martin of Tours Church. The show includes selections from the Mozart “Requiem,” Brahms’ “Requiem” and Haydn’s “Creation.” Margaret Dickinson is the featured organist, with Dr. John Hale narrating. Assistant Director Mark Walker conducts the concert. Walker will succeed Bach Society music director and founder Melvin Dickinson after this season. The Bach Society has a catchy phone number for tickets and info — give old Johann a ring at 585-BACH. —Bill Doolittle

This month’s Waterfront Wednesday, presented as always by WFPK on the Harbor Lawn at Waterfront Park, features These United States, along with Dan Mangan and Audra Mae. The food and drink booths open at 5 p.m. for a happy hour al fresco of sorts, followed by music at 6 p.m. The headliners, These United States, will start around 9 p.m. and are fresh off the release of their new album, What Lasts, which has been described as a melting pot of folk, psychedelic, pop and early rock ‘n’ roll. Mangan, hailing from Canada, takes the stage at 7:30 with his eclectic stylings, while Oklahoma native Mae kicks things off with her fun, twangy tunes at 6 p.m. Remember: No coolers, glass or pets allowed, but blankets, chairs, etc., are fair game. Admission is free. And don’t forget to bring your groove. —Kevin Gibson

Let’s just agree to call it art. As with a painting or sculpture, the creativity is right in front of you. Plus, you have to give a round of applause for all who can stand the heat of the hotshop or the torch. This exhibition features some of the greats, such as one of the fathers of studio glass, Harvey Littleton, “rock star” Dale Chihuly, and Kentucky’s claim to fame, Stephen Rolfe Powell. Women are well represented, including Amy Rueffert and, my favorite, Toots Zynsky. But if you only have time to see one work, make sure it’s by the grand old master Lino Tagliapietra. “I hope this exhibition will encourage visitors to think about contemporary glass in new ways … to be critical about what they will see,” says Scott Erbes, decorative arts and design curator. —Jo Anne Triplett

Nature, no matter how much we are city folk, has a siren’s song. Emily Church lives in Brooklyn but has heard the call. She went far away to the forests of Slovenia and Croatia to get her fix.

Artist Lisa Simon has written eloquently about Church’s art. “Places carved from the cauldrons of World War I and II, communism and the shifting borders of political conflict do not, on first thought, bring to mind minty-limbed timber and amber-dappled light,” she says. “This body of images, though created half a world away, could just as easily have had their nascence within our own Kentucky woodlots, and that is what strikes me as so transcendent … Church is begging nature to come back — come back to her and come back to us.” —Jo Anne Triplett