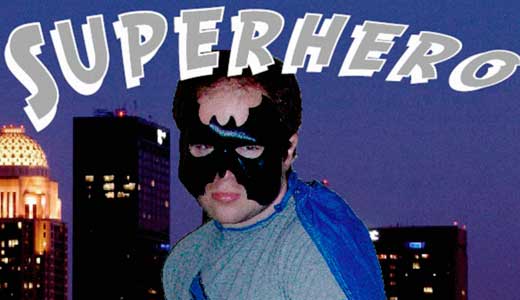 Films about unlikely superheroes are becoming a genre unto themselves; take “Kick-Ass” and “Scott Pilgrim vs. The World,” both released this year. Contributing a local take on this emerging zeitgeist is “The Superhero,” which depicts “the rise and fall of Louisville’s greatest superhero.” The project was produced by a couple of homegrown actor/filmmakers — Jason Saint and Brandon Ingram. Ingram stars as Brandon Branson (a.k.a. Bran Man,) an everyman who is struck down during a freak thunderstorm. Superpowers and a costume follow the lightning bolt, and our hero proclaims, “I’m going to do good! I’m a, I’m a, going to save lives!” This slightly flubbed line typifies the film’s endearing, handmade quality and lo-fi charm. “The Superhero” is the third feature from this duo, and will have its world premiere Friday night at Village 8. —J. Christian Walsh

Books have always been a passion for Jon Ashley, former LEO columnist and a regular in the Louisville music scene. So it’s a natural step that he’s opening his own bookstore, Second Story Books, modeled closely on the defunct Twice Told Books. “Since the closing of Twice Told, there is no longer a bookstore in Louisville that offers both obscure and mainstream literature and nonfiction at reasonable prices or rare, first-editions,” he says. “The torch has now unofficially been passed on for us to fill those demands and give eccentrics and bibliophiles a place to come, meet and have profound discussions.” Saturday afternoon marks the official grand opening of Second Story; they’re partnering with next-door neighbor Bananas, a new vintage store, for the party. There’ll be drinks, music, art and lots of discussion. —Sara Havens

After 140 years, Graeter’s still is making ice cream in those silly little French pots, two gallons at a time, day after day. Shouldn’t someone introduce them to the marvels of modern mass production? Well, it’s not going to be me. You can see why theirs is an admirable family business in History Press’ new volume “Graeter’s Ice Cream: An Irresistible History.” Author Robin Davis Heigel will be giving a weekend reading — not in a bookstore, but at the Graeter’s in Springhurst Center. Louis Graeter started the business in Cincinnati but then left it in a brother’s hands for decades. Louis’ much-younger widow eventually carried on, developing a legacy with generations of sibling entrepreneurs who maintain just the right amount of creative, productive friction. Purchase the book at the reading and you get a free cone. If you can’t make up your mind, allow me to recommend Chocolate Coconut Almond Fudge. —T.E. Lyons

By now, it seems like Jenn Franklin’s never left the stage. Growing up in rural Kansas, she was singing in cover bands at age 12. But it was her relocation to Nashville and collaboration with Berklee College of Music alum Peter Overton for the six-song EP Errors and Admissions that landed Franklin two placements on MTV’s “The Real World.” The right connections continued to fall in line, as Franklin met up with The New Dylans’ Jim Reilley and a backing band featuring ex-Wilco member Ken Coomer and Charlie Chadwick (of Steve Earle’s band). Her newest, Girl Invisible, puts Franklin’s voice front and center, behind tasteful rock accompaniment (see: Bareilles, McLachlan). Marie McGilvray, Justin Lewis and Alanna Fugate also perform. —Mat Herron

No, this isn’t about trailer parks. “Model Homes and Habitats” is an art exhibit that focuses on the welfare of our winged wildlife, with the purpose of encouraging “creative resettlement of species in neighborhoods that would otherwise be devoid of natural habitats or shelter,” as noted by exhibit curator Brad White. In this exhibit, a number of local contemporary artists have created “functional art for manicured suburban yards” — in other words, birdhouses. But they’re really cool birdhouses. The list of contributing artists includes Joe Autry, Thomas Wilson, Lewis Meyer, Billy Hertz and David Bibelhauser. The collection will be exhibited through Oct. 18 at Bernheim Arboretum and Research Forest. On opening night, Aug. 28, there will be live music, food and beer from 6-10 p.m. at the Sunset Amphitheatre. —Kevin Gibson

Beware Highlands residents and passers-by — the zombies are coming, and they’re hungry … for pizza. Zombie Attack 2010 is going down Sunday at 8:29 p.m., and Bearno’s Highlands is ground zero for the bloodied and butchered undead marchers. They’re trying to break a world record this year, so ditch your Sunday best and splash on some fake blood. Meet-ups are at the parking lots of the Back Door and Objects of Desire. Groups will then slither, stumble and moan their way to Bearno’s. There’ll be awards for best “king and queen zombie,” “hot zombie” and “gross zombie.” Also, check out the Zombie Attack Movie Night on Saturday at Bearno’s, which will feature “Dead Snow” and “Dawn of the Dead” (free, 8 p.m.). —Sara Havens

Explosions in the Sky

Noticed early on by Louisville native Jeremy deVine’s Temporary Residence label, Austin’s Explosions in the Sky have risen from being lost among the oceans of instrumental bands to being revered for their cinematic methods: rousing transitions, guitars that alternate between glassy and gargantuan, satisfying codas that unfold like denouements to a film. Speaking of that: Their biggest mainstream exposure came when the quartet wrote the original soundtrack for the 2004 feature “Friday Night Lights.” It’s an apropos pairing, considering Texans’ unchecked affinity for all things football. Tuesday’s show is one of two North American dates before the band plays All Tomorrow’s Parties in New York, after which they’ll head to England to open for Radiohead singer Thom Yorke. —Mat Herron

I’m a big fan of retrospectives. To follow the story of an artist’s career from soup to nuts is always insightful. Claudia Hammer is a consummate artist, skilled at one of the most difficult disciplines to get right — drawing the human figure. Whether she’s working in graphite, charcoal, pastels or oil, she doesn’t disappoint. Hammer cut her teeth in a sadly bygone era, drawing fashion illustrations for Byck’s department store.

“To me, painting and drawing (are) about observation,” Hammer says. “The more I understand what I see, the closer I can come to capturing it. I’m all about humor, fun, optimism and light. Painting is an opportunity to bring out my sense of play. I try to reveal something of myself in each one of them.” —Jo Anne Triplett

A show is ending, a show is beginning. These bookended exhibitions at Swanson Reed Contemporary dig deep into the relationship between artwork and audience. Jacob Heustis has gotten down to the basics in his latest series full of text and symbols, asking the fundamental questions: What is painting? What happens to it when it enters the market? How does this change the viewer’s perception of it? Would these paintings exist without it?

“Bonus Day” is a collaboration between Amy Lemaire and Dana Major Kanovitz that hasn’t happened yet. They will work together, live and in person, at the gallery from Aug. 30-Sept. 3, with a reception the last night from 5-8 p.m. Visitors are encouraged to stop by the gallery to view the process. The show will be up until Sept. 25. —Jo Anne Triplett

I’d love to wear a rainbow every day/And tell the world that everything’s okay/But I’ll try to carry off a little darkness on my back/Till things are brighter, I’m the man in black, professed Johnny Cash. He’s a man whose fascinating life and music continue to intrigue the world, and his adoring fan base extends far beyond the confines of country music. Almost anyone could find themselves stompin’ their feet or tearing it up to one of his classic hits, from “Folsom Prison Blues” to “I Walk the Line.” Derby Dinner Playhouse honors this musician by presenting the new Broadway musical “Ring of Fire.” With a cast of talented singers and musicians, you’ll get a chance to see — and hear — how this great singer-songwriter became legend. —Laura Morton