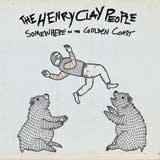 Another notch in the win column for Los Angeles, where working-class rock ’n’ roll can suffocate under the glitz. On The Henry Clay People’s gold coast, we all live on backyard barbecues, ping-pong and a multitude of carefree, recreational activities. The fireworks start off with “Nobody Taught Us to Quit” and “This Ain’t a Scene.” The Clays know exactly where they live, and their current station likely informs “Your Famous Friends,” the pointed middle finger to pseudo-fame and snobbery. Shades of Pavement (the ooo’s on “Keep Your Eyes Closed” recall “Cut Your Hair”) and The Replacements make their presence known, but the quiet restraint of producer/Earlimart deacon Aaron Espinoza is felt on “A Temporary Fix” and “Two Lives at the End of the Night.” All told, a feel-good brew.