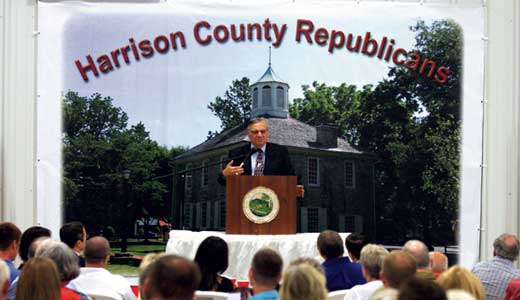 Sheriff Joe Arpaio spoke at a fundraiser for the Harrison County Republican Party.

The self-described “toughest sheriff in America” leaned into the podium and turned serious. He’d already spoken for more than an hour, and it was getting late. The question posed by an audience member was about babies born in this country to mothers who aren’t U.S. residents. Sheriff Joe Arpaio slipped out of character for a moment and said he is squarely on the fence, and that the issue is probably too big to take on because it would involve changing the Constitution. “I don’t have an answer to that one.”

It was unexpected. America’s toughest sheriff, who has built his celebrity by being nothing if not defiant, was acknowledging doubt. At the point where he would have been expected to endorse the idea of repealing the 14th Amendment, the right-wing political wedge issue du biennium, he demurred.

Soon enough he returned to his shtick, the lines you’ve already heard if you’ve read the profiles of Arpaio in The New Yorker or GQ. He seemed weary of them himself, though he knew that was what the crowd expected. How he took away the prisoners’ salt to save tax dollars; housed inmates in tents — in Arizona’s sweltering heat — and forced them to wear pink underwear; instituted the first all-female chain gang in U.S. history. A festival of punishment in which prisoners, many of whom are simply awaiting trial, have their faces rubbed in it or worse.

There were quiet rumblings about Arpaio’s visit, particularly because of the venue. The Saturday night dinner, a fundraiser for the Harrison County Republican Party, was held at St. Joseph Catholic Church, which happens to have a Hispanic ministry. But there were no protests. Inside, the crowd never got too frothy. My Corydon friend Leah Porter, who describes a certain nonchalance that personifies the town’s reaction to most things, called the response slightly gung-ho by local standards. Even a merry band of Tea Partiers, wearing red T-shirts in support of Todd Young, who is challenging incumbent Democratic U.S. Rep. Baron Hill in Indiana’s 9th District, never generated much heat.

By 10 p.m., Arpaio still was soliciting questions. Leah, who was there to gather information for her column in the local weekly, was doodling on her program; she’d refashioned it into a playbill, with Sheriff Joe starring in “Death of a Salesman.” Taken aback by the lack of protests, Arpaio said he wasn’t leaving “until someone hits me with a tough, tough, controversial question.” One person asked if running immigrants off wouldn’t exacerbate the labor shortage in certain menial segments. Someone with the Tea Partiers howled “bull crap.” Arpaio scoffed and said laws on employers aren’t tough enough, so he just arrests the workers. Though I asked, he never acknowledged the duplicity of the business community that reaps economic benefits from cheap labor while exploiting the political benefits of scapegoating immigrants. After 95 minutes on the mic, after suggesting that militarization of both sides of the Mexican border was the final solution, he finally stood down.

With its ties to early Indiana history and a handsome town square, Corydon is the sort of community that’s regularly described as “quaint.” The town of 2,700 sits near an interstate highway exit, around which has grown the predictable corridor of chain stores, but still exhibits a rural feel. Every road out of town leads to some less-populated spot where crops and livestock are commonplace amid the occasional subdivision.

I worked at the weekly newspaper there for five formative years. There is racism in the county, though whether there’s more or less than in other parts of Middle America I can’t say. About 10 years ago, a local elected official caused an uproar when he used a racial epithet while describing the structural integrity of a county-owned building. The Klan came to town. Some of the thinking folks formed a multicultural festival that lives on today. I wrote a piece for LEO at the time pointing out the inequity of stereotyping the entire county over the words of one silly elected official. He is still an elected official.

It stands to reason that a local political party would jump at an unexpected opportunity to bring a rock star to speak at a fundraiser, but staging the event at the parish hall of a church that works with Hispanics struck many as overly provocative. One of the truisms in majority/minority rights debates is the group with bigger numbers cannot understand what it really means to be offensive, but sure can feel offended themselves. The parish hall was rented about the time the church was changing pastors. The Rev. Dan Atkins, who helped build the Hispanic outreach, was transferred to New Albany, and his successor, Rev. Rob Hankee, got blindsided. He took several calls over the past couple weeks, most in protest. He told me Saturday night that the controversy prompted parishioners to express stronger support for Hispanics, which he sees as a silver lining. He also said the church won’t rent its hall for political events going forward to avoid giving the impression of endorsing one thing or another.

Corydon is home to a sizable Tyson chicken production plant. And yet, sources say it’s not heavily staffed with Hispanic workers. The county of about 37,500 is 1.8 percent Hispanic, or 675 people, according to a 2009 Census estimate. That, of course, does not include those who don’t want to be counted. In addition to St. Joseph’s Hispanic ministry, Corydon is home to the nonprofit Hispanic outreach Madera Ministries, which for 10 years has helped immigrants navigate the myriad practical and cultural challenges of living in a strange land.

Joe Arpaio was invited to town to help raise money for Republican candidates in Harrison County. The former DEA agent was first elected sheriff of Maricopa County, Ariz., in 1992, and thanks to constant media attention, much of which he cultivates, the whole country now knows his name. It’s his policy of rousting Hispanics, which was already well under way, that the state’s recently passed immigration bill sought to codify.

According to a July 2009 profile in The New Yorker, estimates say Maricopa County has paid about $43 million to settle abuse claims against Arpaio’s jail. He uses his power to retaliate against critics; a few years ago, he arrested the executive editor and publisher of Village Voice Media, which owns the Phoenix New Times, after the weekly published the sheriff’s home address. He’s thrown protesters in jail for honking horns. The U.S. Justice Department recently threatened a lawsuit if he doesn’t cooperate in its investigation into alleged racial profiling.

He cares not. Arpaio, like Sarah Palin, takes the criticism as validation. Several people I spoke to were bothered by his Corydon visit, though most didn’t want to go on the record — they have to conduct business in a small town. Many more people, including several Democrats, expressed admiration for Arpaio’s “no-nonsense” approach. One compared him to Bobby Knight. They hadn’t heard much about the abuses or wrote them off as sour grapes.

It isn’t difficult to understand the man’s appeal. Some people get a vicarious kick out of watching someone do what they’d do given the opportunity — a vigilante everyman. They’re some of the same people who laughed idly in the high school hallway while the bully pummeled the dweeb. They still love to see someone without recourse get punked.