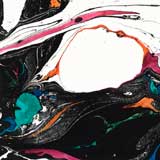 Hope they’re not breaking up. Collections could be a mid-career snack to tide you over, or a signal of the end. Stressful, and that’s the opposite of what a Zero 7 album usually does. Record compiles select classics and reinterpretations led from studio engineers Henry Binns and Sam Hardaker. The two initially made their name working with Pet Shop Boys and Robert Plant. Their recasting of Radiohead’s “Climbing Up the Walls” for former college classmate Nigel Godrich wound up on the BBC, but it was 2001’s debut Simple Things that elevated the group above being puppet-masters. Zero 7’s downtempo moods are seductive (“Destiny”), meditative (“Salt Water Sound”) and jazzy (“Polaris”) affairs. Sia Furler, lately enveloped in her own solo stride, lathers “Distractions” in emotional ambivalence. Never heard them before? Get acquainted. It puts the brakes on life at any speed.