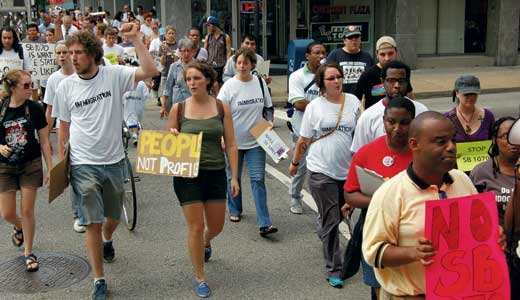 Just after noon, as the lunchtime crowd at Fourth Street Live is beginning to swell, dozens of demonstrators — many of them clad in white T-shirts emblazoned with the word “immigration” — ask to see the citizenship papers of patrons and passers-by.

“Can I see your papers, please?” they inquire.

Their audience, mostly white business-types en route to the food court, answers with quizzical looks and furrowed brows. Most just shake their heads, wave their hands “no” and keep walking, never bothering to make eye contact with the faux Gestapo.

The demonstrators, members of various social justice organizations including the Fairness Campaign and the Hispanic Latino Coalition, have taken to the downtown entertainment district to conduct street theater in protest of Arizona’s Senate Bill 1070 — better known as the “Breathing While Brown” law, which critics say would enable racial profiling of Latinos by making a misdemeanor crime of residing in the Grand Canyon State without proper documentation.

That same day, U.S. District Judge Susan Bolton placed injunctions on key provisions of the onerous bill, including the controversial measure that allowed police to stop a suspect on the basis of race and deport them if the suspect doesn’t possess the correct documentation.

“Requiring police to check the immigration status of those they arrest or whom they stop and suspect are in the country illegally would overwhelm the federal government’s ability to respond,” wrote Bolton, “and could mean legal immigrants are wrongly arrested.”

“It’s a federal issue,” says Lucy Arce Ferrer, a senator from Puerto Rico who happened to be exiting a taxi with fellow Puerto Rican Sen. Juan Hernandez in front of the Brown Hotel as the protestors rounded Fourth Street via Broadway, chanting “Si se puede!” Spanish for “Yes we can!” The two senators were visiting Louisville on official business.

“What happens in Arizona affects us everywhere,” Ferrer says. “As an American citizen, I respect all rights and the right to quality of life. The greatness of this nation is that it is still the melting pot of the world — and Latinos are part of it. We oppose legislation like this.”

Some, however, do not oppose such legislation, as demonstrator Peter Fosl would discover.

“If they’re breaking the law to feed their family, what would you say to that?” Fosl, a Transylvania University professor, argues to an outspoken, middle-aged man passing through the scene and sporting a McCain/Palin T-shirt.

“Half measures don’t work,” the man retorts. “If you’re here illegally, then you ought to be treated that way, as an illegal.”

Round and round they go, circling about that same word — illegal — until they agree to disagree.

“It’s a shame that people would want to blame the weakest people involved in this issue — the immigrant,” Fosl says. “If you have a 20-year waiting list for a visa when you can just break the law and start sending money to your family right now, which would you choose? Clearly, the procedures aren’t adequate.”

Even though Kentucky doesn’t have a law on its books comparable to Arizona’s SB 1070, the commonwealth has its fair share of obstacles for non-natives.

For example, Kentucky is one of only a handful of states that participates in the U.S. Immigration and Customs Enforcement 287(g) program, which enables local and state law enforcement agencies to detain suspected immigrants for up to 48 hours — and sometimes longer.

“People don’t understand that these programs exist, and what Arizona is doing is unnecessary and completely redundant,” says Becca O’Neill, a Louisville-based immigration lawyer. “They can already hold these people indefinitely for the slightest of infractions. Locally, I think there’s a huge problem with racial profiling. I’ve had clients profiled for traveling 5 miles over the speed limit and being held for little reason other than the color of their skin.”

According to O’Neill, a large part of the problem lies in the necessity of cheap labor within the American economy.

“There’s a nuance to it,” she continues, “because employers aren’t supposed to hire people that don’t have tax identification or a Social Security number. But (an employer) can get into trouble if they require too much documentation with regard to discrimination law. I think the state and federal government tend to look the other way, because they know that if they did a raid, then (some businesses) simply wouldn’t be functioning.”

Over the last 20 years, Louisville has become a destination for immigrants. According to an Urban Institute report entitled “A Profile of the Foreign-Born in the Louisville Metropolitan Area,” immigrants have become a critical component of the total population growth in Louisville, representing 49 percent of Jefferson County’s total growth during the 1990s.

“There’s certainly been an increase (in immigrants),” says Carolyn Miller-Cooper, director of the Louisville Metro’s Human Relations Commission, an agency tasked with bridging ethnic and racial divides in the city. “I think we get a fair share, even though the numbers have increased nationally as well.”

Miller-Cooper estimates the proportion of immigrants relative to Louisville’s overall growth has increased since the 2000 census — meaning immigration continues to represent an increasingly larger share of the city’s population.

And with that continued influx, the report continues, comes a strain on municipal social services, including the ability of schools and law enforcement to adapt to an increasingly multicultural landscape. “Between the 1997-98 and 2004-05 school years, the number of English as a Second Language students in Jefferson County Public Schools grew by 122 percent, from 900 to 2,000,” according to the report.

Louisville also is a haven for political refugees. Per the success of the public-private Wilson-Fish relocation program, an alternative to the 1980 Refugee Act that provides funding for social services aiding refugees, 15 percent of Louisville’s immigrant population is comprised of asylees — twice the national average.

While Arizona Gov. Jan Brewer has pledged to fight Judge Bolton’s injunctions, the ironic part in all of this is that the Obama administration — widely criticized for doing nothing regarding immigration reform — has outpaced the Bush administration’s number of individual deportations by 10 percent, as 400,000 expect to be deported this fiscal year.

“There are plenty of obstacles to being an immigrant without a law like Arizona’s,” O’Neill says. “In an earlier time in this country, if you didn’t have head lice, you were admitted. So it’s not a fair comparison to say, ‘Well, my grandparents came here legally, why can’t they?’ Our system today is completely different, and it’s dysfunctional.”