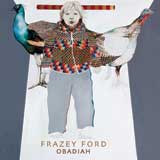 This is a heartbreaker, but in the best way. One-third of folk ensemble The Be Good Tanyas, singer Frazey Ford has released a charming solo debut that she hammered out over a summer in Vancouver. Ford has grown up on a steady diet of spare and sultry storytelling, but she can change that plan around to meet her funky needs when the opportunity arises. That’s the case on “Blue Streak Mama,” a nice piece that finds her leaving her tools out in the cold and showing off impeccable mic technique. Her set is one that’s heavy on longing mood-pieces that drift in and out of one another effortlessly. Points for cohesion. Not sure whether a remake of Dylan’s “One More Cup of Coffee” is necessary to make this thing tick — let someone else grind that gear — but it’s an inoffensive addition nonetheless.