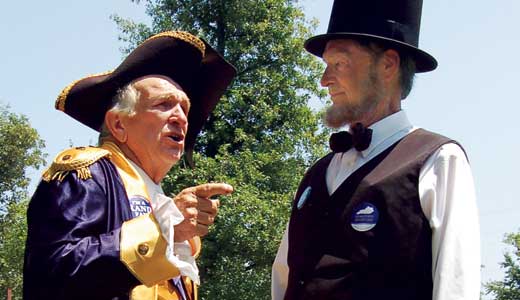 FANCY FARM, Ky. — In 10 minutes, campaign season in the Bluegrass State will officially begin as it always does: With cheers, jeers and the venting of barbecue-induced political rancor.

In 10 minutes, these three elements will combine to form the crux of the 130th annual St. Jerome Fancy Farm Political Picnic, but for right now, in this moment of sweltering heat and frenzied anticipation of the day’s speech-making, Bowling Green ophthalmologist and Republican U.S. Senate candidate Rand Paul briskly walks by a gaggle of photographers with his wife, Kelley, his face stoic. They ascend a wooden ramp leading to the makeshift stage where, in mere moments, a sweaty public will verbally abuse him and a dozen other politicians from this great commonwealth as if they were heels in a professional wrestling match.

The candidate and his spouse ignore them, stopping only to wave at supporters before disappearing behind a white curtain.

Paul, the rock star libertarian gaffe-machine who earlier this year expressed discomfort with elements of both the Civil Rights Act and Americans with Disabilities Act, has generated much attention in his race against Democratic Kentucky Attorney General Jack Conway — so much attention, in fact, that a blitzkrieg of carpet-bagging national press types, including reporters from TIME Magazine, C-SPAN and Talking Points Memo, have descended on this small Graves County town like a swarm of Tweeting locusts. Despite rumors that Paul’s handlers have forced him to stick to a script, they are here to witness firsthand the next outrageous thing he might say.

As a result, this year’s picnic is the largest on record: The West Kentucky Star reported more than 15,000 people were in attendance, a great many of whom are doing their best to consume roughly 18,000 pounds of mutton, pork, steak, chicken and bullshit (the crowd favorite).

Consequently, it’s also one of the most unhinged as well.

“Do you know how many farms are owned by families?” Conway supporter Mike Ross, who teaches agriculture at Mason County High School, asks Death. “No, you don’t know,” Ross laughs, “so I’ll tell you: Less than 1 percent of the farms are owned by families in Kentucky. The remaining 99 percent are corporately owned, so an inheritance tax will have little to no effect on them. Now get out of here.”

Such conversations — with varying levels of amiability — are common at Fancy Farm. Others simply defy coherence.

A member of the Boone County Tea Party, Johnson sells insurance when he isn’t screaming at strangers while dressed up as America’s first president. When asked why he doesn’t support Conway, Johnson says simply, “He’s for abortion!”

It’s a scene of costumed chaos and shtick. Spotted making the rounds are Flipper the dolphin accusing Conway of flip-flopping on issues, and a “Neander-Paul” caveman sporting a club and libertarian worldview. Then there’s Rand Paul’s Waffle House, where menu items include the “Term-Limit Scramble,” with the description, “Rand won’t eat these, but he insists you do.”

Swirling in this vortex of madness are various state politicos working the circuit — glad-handing, generally making themselves known, and doing their best to avoid saying anything incriminating to various party operatives or reporters scouring the landscape with recording devices. Gatewood Galbraith, a Lexington lawyer, marijuana advocate and independent gubernatorial candidate, is here as always. It’s his fourth run for governor, and his message remains the same.

“The parties are the problem,” Galbraith says. “The leadership of both parties have their horns locked up like two bull-elk fighting over territory, while the business of the people lays dead in the grass.”

Despite an obvious anti-Paul energy, the mood for Democrats is decidedly lovelorn. Numerous speeches — particularly those made by Gov. Steve Beshear and Conway at Friday’s Marshall County Bean Supper, a pre-Fancy Farm pep rally for the party — attempted to address the party-wide rift created in the wake of the bitter primary battle between Conway and Lt. Gov. Daniel Mongiardo, who did not attend the weekend’s festivities.

Republicans sought to capitalize on this disconnect by distributing fake $80,000 bank notes — a reference to the amount of campaign debt that Democrats ostensibly retired for Mongiardo in order to gain his endorsement of Conway and to prevent Mongiardo’s native Eastern Kentucky from being vulnerable come November.

Another noticeably absent candidate was Louisville Mayor Jerry Abramson, who is running as Mongiardo’s replacement alongside Gov. Beshear in next year’s gubernatorial race. Chad Carlton, a spokesman for the Mayor’s Office, says Abramson had a family commitment over the weekend and could not attend.

By the time the speech making begins, the crowd can already taste blood. Republican Senate Minority Leader Mitch McConnell takes the opportunity to say “Obama, Pelosi and Reid” every five seconds and fucks up a rendition of “My Old Kentucky Home,” whereas Gov. Steve Beshear makes the case that Paul’s handlers have let him speak his mind too freely, and that “the entire commonwealth of Kentucky ought to be scared of Rand Paul.”

But for all of the attention lavished upon him, Paul’s speech is a snooze in the sense that he doesn’t call for, say, the state to secede from the Union, or for the resegregation of our public schools. Rather, he merely excoriates the tax code and calls upon the amorphous “exponential energy of capitalism.”

Preceding Paul, Conway calls on party faithful to work hard to defeat an opponent who’s beating his ass by 8 points. Conway’s words ring hollow when one considers that behind all of the rhetoric, the supposedly liberal candidate supports an extension of the Bush tax cuts, has made no anti-war statements of note, and has equivocated multiple times on the issue of mountaintop removal mining and cap-and-trade legislation.

Which is why what is said at Fancy Farm should stay at Fancy Farm, much like what is said between Hulk Hogan and Macho Man Randy Savage has little effect on their real world alter egos, both of whom ultimately work for the same company and go out to dinner with each other’s families; their onstage rhetoric is farce because the “sport” itself isn‘t real.

In this context, the governor has the best line of the day.

“It is very appropriate that the Nov. 2 Election Day falls a couple days after Halloween,” Beshear tells the crazed, fan-waving audience, “because there are two groups of people that ought be scared to death by these candidates.”

Those two groups? Why, that’s you and me.