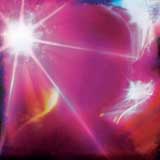 Lydia Burrell is the solo outing from former Kangaroo member and composer Alexander Smith, who created Burrell as a character in a screenplay. If this album is a soundtrack, the role Burrell plays here is one of an unobtainable object of desire to that of Smith’s solitary, jilted lover. He’s left to ask questions without clear answers. Across eight tracks, his lyrics walk paths of heartbreak, loneliness and depression against a backdrop of quasi-hopeful synthetic beats and keyboards. I’m a boot with no sole/I’m a list of clichés about futility/I’m the last person you would call in an emergency, he sings on “Tuxedo.” He occasionally treads into brighter territory — I’ll never see anything that doesn’t reflect light — but overall the theme is clear: Breaking up is hard to do.