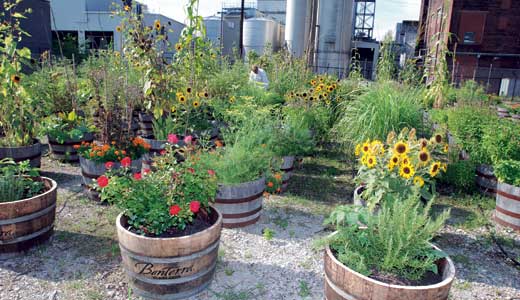 It’s pretty cool that two of the people named by Time magazine as “The World’s Most Influential People” are local-food visionaries. Both Will Allen and Michael Pollan have done an enormous amount to foster an understanding of the importance of small-scale, sustainable agriculture and the development of local food economies. This also says a lot about the growing awareness of our sick food system. Though Allen and Pollan educate using different approaches, they have both raised the profile of local foods, and are no doubt responsible for the growing number of community gardens and local food initiatives that have sprouted up all over Louisville.

Will Allen, former professional basketball player, is CEO of Growing Power, an urban farming project in Milwaukee. Allen transformed a 2-acre dilapidated nursery into a diverse urban farm that makes compost and raises vegetables, tilapia, livestock and honeybees. One of the cornerstones of his project calls for engaging people in the community and teaching them the skills they need to produce high-quality food on their own. (On a visit to Milwaukee, a salad I ordered at a restaurant had microgreens from a nearby offshoot organization that Allen had trained and mentored.) Nearly 15 years after he purchased the land, he has about 40 full-time employees and plans for a state-of-the-art, five-story greenhouse.

Michael Pollan, writer, professor and contributor to The New York Times Magazine, has authored six books, including “The Omnivore’s Dilemma: A Natural History of Four Meals,” “In Defense of Food: An Eater’s Manifesto” and “The Botany of Desire: A Plant’s-Eye View of the World.” “The Omnivore’s Dilemma” explored the four ways societies have obtained food over the years, and ultimately found hope in small-scale, self-sufficient farming after visiting Joel Salatin’s Polyface Farm in Virginia. The book also explored and criticized the food industry, and exposed the virtual omnipresence of corn in everything we eat.

Movies like “Food, Inc.,” “Fresh,” “King Corn” and “Grown in Detroit” have highlighted these thinkers and exposed the realities of our food system. More importantly, as we wake up to the realities of the status quo, we are demanding change and embracing agriculture as an avenue to health and fresh food.

Lucky for us, Louisvillians have been listening, watching and reading — and there are exciting projects and resources for novice farmers and gardeners all over the city.

The local nonprofit Breaking New Grounds, which took a cue from Will Allen, has upgraded to a larger plot of land in the Park Hill/California neighborhood in the West End. They are producing worm compost and vegetable gardens, and are in the process of replicating the aquaponics system Growing Power has mastered in Milwaukee. In fact, Allen mentored Breaking New Grounds, and has high hopes of making it one of four regional training centers for Growing Power.

Mark Williams, executive chef at Brown-Forman, started a bourbon barrel garden a few years ago using old barrels from the distillery’s operations. He cut the barrels in half, drilled a few holes for drainage and filled them with mulch and potting soil. This summer, he started experimenting with gardening that is about as simple as it gets: slicing open a bag of topsoil and planting it with squash and melons. Williams — who also started the Bluegrass chapter of Slow Foods — is committed to preserving rare and endangered varieties of seeds, and planted his garden almost exclusively with heirloom or organic varieties. While the garden doesn’t produce enough to feed the hundreds of mouths Brown-Forman feeds every day, Williams says it gives people a chance to at least taste something grown right here, which makes people feel more connected to the food.

The Salvation Army’s Center of Hope Kitchen has a culinary training center for the homeless and those living below the poverty line. In 2007, Chef Timothy Tucker started the “Garden of Hope.” The students plant, care for and harvest 1,500 pounds of food each season from the garden. They bring the harvested food full circle by cooking it and serving it to hundreds of families every day. An additional 50 raised beds were built and donated this year by EDGE outreach and will be planted this fall.

Aside from projects that bring homegrown food to the people, there are other organizations out there trying to bring the people to the gardens. 15Thousand Farmers, a network of home-based and community gardeners (who have their sights set on a network of 15,000) is converting backyard (and front yard) gardeners by offering a class called “The Very Very Basics: Growing 101.” The subtitle is “It’s never too late,” and it aims to teach growing techniques and provide checklists to take aspiring gardeners into the fall months. The next series will be held on Sept. 5, from 4-5 p.m., at 2111 Speed Ave., with a suggested donation of $10. (Go to www.15thousandfarmers.com for more info.)

The Cooperative Extension Services of Jefferson County manages six city community gardens and four county community gardens. The city gardens offer 10-by-20 plots for $10 per year, while the county gardens offer 30-by-30 plots for $20 a year. Nearly 600 plots were used this year; a waiting list gives aspiring gardeners their turn in the dirt. (The slightly less popular county gardens program is giving unrented plots away for free this time of year.) To reserve a plot or get on a waiting list, call 569-2344. (On weekdays, the same number serves as the “Horticulture Hotline” from 9 a.m.-noon and 2-3:30 p.m.) Gardeners-in-need can make use of the extension office’s Master Gardener Program, whereby volunteers make “garden calls” to help flailing amateurs.

Fans of both Will Allen and Michael Pollan will have a chance to hear them speak in Louisville this fall. Pollan is scheduled to speak at Bellarmine University for free at Knight’s Hall on Oct. 7 at 7:30 p.m. Allen is the honorary chairman for Breaking New Grounds’ annual Down ’n’ Dirty fundraiser on Nov. 6 at 8 p.m.