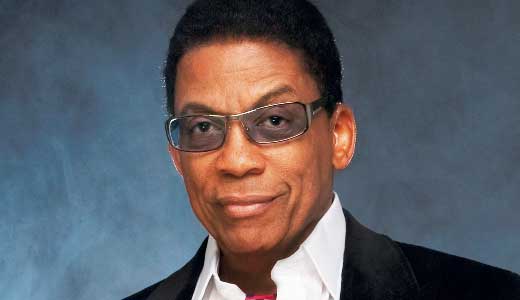 Pianist Herbie Hancock has been in the forefront of jazz since the early 1960s, including his high-profile tenure as part of the legendary 1963-68 lineup of the Miles Davis Quintet. His solo recordings began a year earlier, and he was a much sought-after pianist for countless jazz recording sessions. Yet from early on, he has been a popular musician outside of jazz circles. He had a hit with “Watermelon Man,” led the influential and funky Headhunters in the 1970s, scored big with “Rockit” in 1983, and recorded River: The Joni Letters, which in 2008 won Grammy Awards for album of the year and best contemporary jazz album.

Hancock’s newest outing, The Imagine Project, presents the John Lennon title track with collaborators Jeff Beck, Pink, Seal and India.Arie, plus nine other pieces, with a musical and philosophical goal of world unity through music. Other guests on the record include iconic saxophonist Wayne Shorter, Chaka Khan and Ravi Shankar’s daughter Anoushka Shankar, all on the closing “The Song Goes On”; and the Chieftains (“The Times They Are a-Changin’”). Most of the tracks feature West African guitarist Lionel Loueke and drummer Vinnie Colaiuta, who will join Hancock here at the Brown Theatre on Sunday. Filling out the band will be bassist Pino Palladino, second keyboard player and vocalist Greg Phillinganes — whose résumé includes stints with Quincy Jones, Michael Jackson, Eric Clapton and Stevie Wonder — and vocalist and violinist Kristina Train.

Hancock, who turns 70 this year, is excited about both the new album and the tour to support it.

LEO: How did you choose the songs for this album?

Herbie Hancock: We (Hancock and producer/bassist Larry Klein) started off with preliminary lists of possible songs, and we had a simultaneous process of picking and choosing songs and artists to collaborate with. It was kind of like putting together a puzzle. There are a lot of songs the artists might be familiar with that the general public also knows, but we could put a new spin on it and find songs that would be appropriate to the purpose of the record, which is about peace through global collaboration. This is why the (Peter Gabriel) piece “Don’t Give Up” in and of itself is not necessarily about global collaboration, but it’s about the spirit behind working toward peace. Don’t give up on peace, don’t give up on being able to embrace and work with other cultures. Don’t give up on peace in the Mideast between the Palestinians and the Israelis; don’t give up on a solution to wars between the United States and Iraq and Afghanistan; don’t give up on peaceful relationships with North Korea. Germany and Japan used to be our dire enemies during World War II, and now they are more than allies.

LEO: How did you first meet and work with your guitarist, Lionel Loueke?

HH: He was selected to be in the collegiate program for the Thelonious Monk Institute of Jazz, for which I am the chairman. When we got his submission, everybody flipped over how he played guitar and all he was doing. As soon as the program was over, (trumpeter) Terence Blanchard snatched him, then I snatched him back; in fact, two years ago, I snatched Terence himself with Lionel for a tour.

LEO: It sounds like that might free you up to do more improv while he carries the undercurrent.

LEO: And your drummer, Vinnie Colaiuta?

HH: He’s a drummer’s drummer. It’s like there’s a Vinnie Colaiuta School of Drummers, and he’s got a huge following. When I introduce him to the audience, there’s always a huge hand, even if he hasn’t even played yet. He can play any style, any genre to perfection. His sense of music is amazing. And don’t mention rhythm! His time is like an atomic clock (chuckling); it’s a groove you can’t stop. Plus he’s a jazz player, and he can lay that down — he’s not someone who plays at it, and his taste is impeccable.

LEO: The concert has been described as a set of “greatest hits” and a set from the new CD. Is this correct?

HH: Now we actually combine them, we mix and match them. We open with “Actual Proof,” and we do “Watermelon Man.” I made a medley of several songs, including “Maiden Voyage,” “Speak Like a Child,” “Round Midnight” and “Cantaloupe Island.” If the audience demands it, we do “Chameleon.”

LEO: We see the Blue Note years, your years with Miles, Mwandishi, Headhunters, and the last few albums, which had more of a pop orientation. You remind me of a musical chameleon.

HH: (Laughs) Yeah, that’s why I came up with that title. When I recorded that on the Head Hunters record, I had not gone in that direction before. I had not actually played synthesizer before. It was a new direction of jazz fusion or jazz funk.

LEO: Why should someone who’s not a jazz fan want to come see this tour?

HH: The Imagine Project record has been primarily described as more of a pop record than a jazz record. I understand that, but it all just sounds like music to me. The music we do from that record is familiar to a pop audience — they know “Imagine,” “The Times They Are a-Changin’,” sometimes we do (Joni Mitchell’s) “Court and Spark.” We don’t always do all those pieces, otherwise we would have a three-hour concert (laughing).