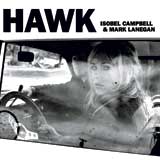 His-and-hers companion pieces feeling de rigueur, no? Scottish cellist and composer Isobel Campbell was a member of Belle & Sebastian from 1996 until 2002. Nice to see you again. Lanegan has sloughed off the skin of Screaming Trees/Queens of the Stone Age/Gutter Twins to join the thought party. Her breathy apparition of a voice meets up with Lanegan’s lone-wolf gunslinger for a tandem vocal approach that’s supple. Their backing band dips into sonics tailored to a dark western film (“Snake Song”), barroom dance-off (“Get Behind Me”) or ’50s revue (“Come Undone”). But Hawk might all be too long in the talon, as it were. The latter half sounds a little heavy on soft retreats and jaunty disposition, like the full-on Mazzy of “To Hell & Back Again” and “Eyes of Green,” while “Lately” beats its chorus to death.