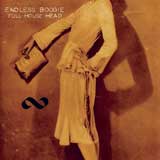 It’s no minor achievement that Endless Boogie’s new album, Full House Head, appears only two years after their official debut. Uninterested in the careerism of the rest of the indie music community, Endless Boogie had been jamming in their Lower East Side practice space for years before they were persuaded almost a decade ago to play their first show. Their patience pays off in the cohesiveness of Full House Head. Their sophomore effort shows no signs of slumping, as these tunes are even sharper than those on Focus Level. That said, there’s still plenty of sprawling heavy guitar rock, with solos aplenty, recorded in beautifully crisp high fidelity. The lone exception being the wonderfully messy “A Life Worth Leaving,” a 22-minute side-long closer culled from a practice tape.