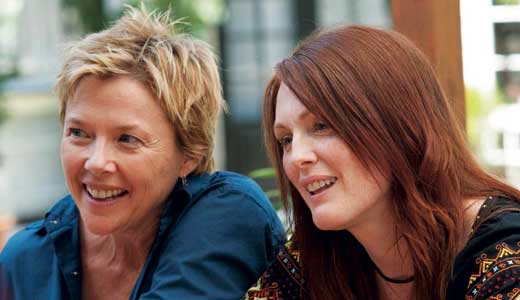 The Kids Are All Right

I first saw “Chasing Amy” as a closeted 16-year-old working one summer at a video store, combing the aisles when no one was around in search of anything kind of gay. At the time, I had no clue that “Amy” was part of a legacy of films and TV shows that depict a much despised lesbian stereotype: the “lesbian” who, for whatever reason, sleeps with a man. (I also was blissfully unaware of the tradition of conflicted lesbian film protagonists who wind up dead.) Those who seek out gay-themed movies and television can eventually become indoctrinated with the belief that no one is actually, unequivocally, a lesbian (except, of course, for the ones who obviously are).

Among the other movies I secretly watched that summer was “High Art.” The 1998 film was one of the first indies with a lesbian theme to garner any kind of critical praise — even if, incidentally, its lesbian protagonist dies, too. And Lisa Cholodenko, the out director at the helm, was involuntarily burdened with the hopes and dreams of an entire community. A decade later, still faced with obvious, state-sanctioned discrimination, queer people strive for something far more personal than a marriage license: legitimacy. And for some, the most telling measure of the success of that quest is visibility. We want others to see us as we see ourselves. The trouble with that desire is that the “we” in question is as diverse in perspectives and expectations as any group sharing only one thing in common.

Cholodenko’s new film, “The Kids Are All Right,” already has Oscar buzz surrounding its actors and writer-director. Cholodenko has graduated from making downers about drug abuse and disillusionment (“High Art,” “Laurel Canyon”) to a relatively mainstream, family-oriented dramedy that is marketable, theoretically, to a wider audience. Well aware of the history of lesbians in film, however, she decided to employ the oldest trick in the book. Spoiler alert! Julianne Moore’s character, a mother of two in a longstanding lesbian partnership, cheats on her partner (Annette Bening) with their children’s sperm donor (Mark Ruffalo). At least Moore doesn’t die.

Now, if Cholodenko were a straight male and “didn’t know any better,” she would probably not find herself in uncomfortably hot water. But after initial screenings, word of Cholodenko’s crime against her own people spread across the Internet like wildfire. “Boycott!” they cried. Soon, online discussions pitted subgroups of queer women against each other. The “gold stars” (lesbians who have never slept with men) climbed on a giant high horse and, armed with capital letters, began shouting invective at Cholodenko’s more sexually fluid defenders. Few of these people had even seen the film.

Nor have I yet, but I’m almost more interested in the argument it has raised, which has taken on a life of its own, than the film itself. My own reaction was ambivalent at best, but I’m willing to give Cholodenko the benefit of the doubt. Witnessing the whirlwind of accusations forced me to come to terms with some of my own secrets and insecurities. For example, I know plenty of “gold stars,” myself included, who are intrigued by the thought of a male sex partner. One of my closest friends, an astute thinker and confirmed lover of women, commented, “I’m not boycotting shit. I’d sleep with Mark Ruffalo!”

If she ever does, more power to her. A community that supposedly values sexual freedom negates its own philosophy when its members begin judging private sexual behavior. But even with this knowledge, I still instinctively scoff at the stereotype in question. Am I secretly afraid of my future girlfriends escaping lesbian bed death in the arms of a dude? Kind of. Is it partially because I’ve seen it happen, with unrealistic frequency, on TV and in movies? Probably.