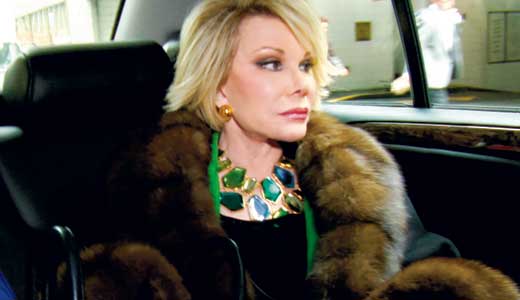 The opening scene is a close-up on Joan Rivers’ face as she is getting foundation applied. It’s the quintessential shot of the film — a stark, unfiltered glimpse of the man behind the curtain, the clown without her makeup. All we really know of the comedy legend is what’s been put in front of the camera — a polished, practiced routine from a talented actor. “I know I’m an actress,” she professes. “It’s all about acting. My career is an actresses’ career, and I play a comedian.”

“Joan Rivers: A Piece of Work” takes viewers behind the curtain for an in-depth look at an aging star hustling to hold on to the spotlight. Joan Rivers is vulnerable. She’s self-doubting and self-deprecating. She’s afraid. “I’ll show you fear,” she says to the camera as she holds up a blank page of a day planner. “If my book ever looked like this, it would mean that nobody wants me, that everything I ever tried to do in life didn’t work, nobody cared and I’ve been totally forgotten.” Naturally, these are the traits that drive most comedians.

Filmmakers Ricki Stern and Annie Sundberg (“The Devil Came on Horseback,” “The Trials of Darryl Hunt”) walk a fine line between showing and telling. It’s certainly not a Joan Rivers pity party for 84 minutes. Rather, the cameras follow her over the course of a year as she tries every way she knows how to get her name back in the papers. She turns no gig down, working clubs from Wisconsin to Horseshoe Casino in Southern Indiana. She catches a little break by winning NBC’s “Celebrity Apprentice,” and for a brief moment, we see exactly what drives her, what keeps her chasing approval from an audience. “I am a performer,” she says. “When I am on stage, it is the only time I am truly happy.”

The film also delves into her 40-year history in show business — from the first stamp of approval by Johnny Carson to becoming a groundbreaking female comic who wasn’t afraid to tackle taboo subjects (abortion, homosexuality) in the ’60s and ’70s to the birth of her daughter and the suicide of her husband. Given everything she’s accomplished, it’s startling to see her often lose confidence in her talent, in her career, in herself. But during every low moment, she cracks a joke, smiles and moves on to the next task. “Joan is a chronic workaholic. One job a day isn’t enough,” says former manager Billy Sammeth. “No matter how much you give her, it doesn’t fill up that need to be working.”

The film’s other talking heads include members of her staff, friends, daughter Melissa and even fellow comedian Kathy Griffin, who acknowledges she wouldn’t be doing stand-up if not for Rivers. “You know what the real pinnacle in a comedy career is?” Griffin says. “It’s not an Oscar, it’s not one thing, it’s the fact that you’re still doing it. She’s really the master of sticking in there.”

“A Piece of Work” documents the ups and downs of an actor looking to remain relevant. “Age is the one mountain that you can’t overcome,” Rivers says during a scene showing her celebrate her 75th birthday. “It’s a youth society, and nobody wants you. If one more woman comedian comes up to me and says you opened the doors for me, you wanna say, ‘Go fuck yourself.’ I’m still opening the doors.”