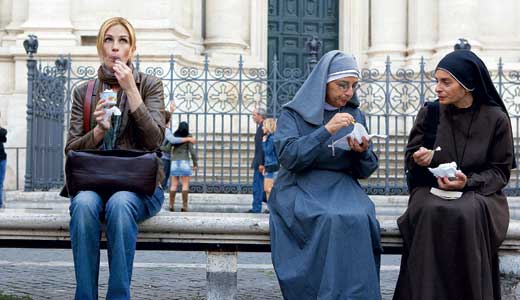 Sitting through “Eat Pray Love” is kinda like visiting a friend after she gets back from a trip and having to endure three hours of vacation videos. Even if that friend is Julia Roberts, seeing the glamorous sights of foreign lands you’ve never been to can get boring. “I can’t even afford a ticket to Vegas … so why are you flaunting a year’s worth of travels around the world in my face?” I wanted to ask. But then I heard Oprah on my shoulder saying, “Her journey is our journey. Take the lessons she learned and apply them to your life, sister.”

“EPL” is based on the best-selling book by Elizabeth Gilbert in which she documented her year of travel at three destinations — Italy, India and Bali. Escaping a failed marriage and a feeling of uselessness, she finds “eat” in Italy, “pray” in India and “love” in Bali — all with the help of strangers who quickly become friends. In the book, the story is told in Gilbert’s head. Humorous quips, relationship epiphanies and moments of self-doubt flow naturally. Translating that onto the big screen without having Roberts talk to herself was the challenge here, and they didn’t quite nail it. There was a bit of awkward narration and characters brought in just to reiterate a certain theme or message.

The most entertaining part of the Ryan Murphy-directed film was the bit in Italy where she learns to let go of body image and the concept of making food a reward. “Americans don’t think they deserve anything unless they’ve earned it,” an Italian man says to her using large hand gestures. “In Italy, you offer us something, we just take it.”

The cast, which features heavy hitters like Richard Jenkins (“The Visitor,” the dad in “Six Feet Under”), James Franco and Billy Crudup, give fine performances. And directory Murphy (creator of “Glee”) certainly can’t be faulted. So it’s hard to pinpoint exactly where “EPL” derailed. Forgive me for saying this, Julia and Oprah, but “Under the Tuscan Sun,” which had a similar premise, was far more entertaining and less preachy — perhaps because there was more wine and sex flowing.

If you can get through this movie without yawning, thinking about chores at the house, or how unfair it is that Julia Roberts looks as amazing now as she did 20 years ago in “Pretty Woman,” you’ll have a black belt in meditation. Trip to India not included.