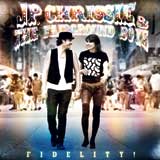 It’s a collection of anthems for star-crossed lovers whose orbits are finally and unexpectedly traveling in heat-seeking parallels. Welsh singer-songwriter J.P. Jones and head Pretender Chrissie Hynde are sick with want over something they can’t have: each other. He’s almost half her age, but succeeded in softening an aging beauty’s heart into a puddle of schoolgirl crush, enhanced by poor timing. Mostly guys like you, say goodbye to me/And they never offer me a ride home, she sings to his clarion call on “Australia.” Their romance is an arduous trek, one not unlike that of Johnny’s relentless pursuit of June Carter. It yields universal themes on how distance — emotional, spatial and, yes, numerical — exists not to defeat, but to be defeated.