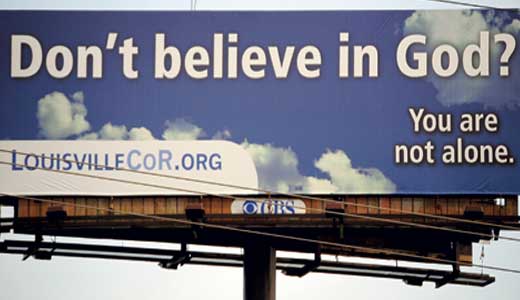 Even as a child growing up in a devoutly Christian home, Carlo Kellem was uncertain about the existence of God. Splitting his Sundays between church services with his Catholic mother and Baptist father only raised more questions.

“It really tripped me out how different their churches were,” the 31-year-old says. “I knew something was wrong, but I was always too hesitant to say something.”

Like many non-believers, Kellem, who has identified as agnostic since high school, kept that skepticism about God to himself as he explored various religions looking for answers. Ultimately, he discovered agnosticism.

“I used to let people assume I was a Christian,” Kellem says. “If somebody asks now, I’m too outspoken to the point where eventually people don’t want to talk to me about it anymore.”

But because not all non-believers are quite so vocal, a recently installed billboard along Interstate 65 at the Phillips Lane exit hopes to give local atheists, agnostics and skeptics a more prominent voice.

The message emblazoned on the billboard: “Don’t believe in God? You are not alone.”

The Louisville Coalition of Reason, a confederation of secularist groups that advocate for the separation of church and state, paid for the sign in an effort to inform non-believers that they are part of a larger community. The sign was strategically placed near the Kentucky Fair and Expo Center to draw the attention of fairgoers. The Louisville Coalition of Reason also is sponsoring a booth at the upcoming state fair to further spread their message.

“We’re reaching out to all people who call themselves atheists, agnostics, humanists, or others who just show apathy toward religion to let them know we’re here,” says Edwin Hensley, coordinator of the coalition, adding that living in the Bible Belt can be intimidating for many secularists.

Coalition leaders contend the billboard should not be viewed as offensive, and they are not expecting a backlash or confrontation at the state fair. They also hope the billboard will not be vandalized.

That said, the coalition already has received angry e-mails proclaiming group members will “go to hell,” that America is a Christian nation, and that its members should not be living in Kentucky.

“I don’t like anything about atheism or atheist people, but I can’t do anything about that,” says Jimmy Harston, who has created several Christian billboards that can be found along I-65, relaying messages like “Hell is Real” and “Jesus Saves.”

Those signs — which he designed for interested parties who own land along the interstate — are located on private property and have been the subject of legal battles with state government for the past two years. In 2008, the Kentucky Transportation Cabinet sued to have Harston’s messages taken down, claiming their placement is a dangerous distraction to drivers. Specifically, the state points out that the billboards are situated lower and closer to the highway than those on public property, saying their concerns have nothing to do with the messages on the signs.

Although a judge ruled in the state’s favor, an appeal is pending and the billboards remain.

“If the atheists put up a sign that they don’t believe in God, then that’s their right just as it is mine,” Harston says. “They have to deal with God in all that, you know, just have mercy upon them.”

Non-believers are accustomed to hearing such comments, which is why some are careful about sharing their absence of faith with co-workers, family and friends out of fear of being ostracized.

“People have different and valid reasons for not coming out. (The Coalition of Reason) encourages them to, but we don’t force them if the situation is not good for them,” Hensley says. “One member lost a client from his business. Other members are married to Christians and have issues within their family. I know one gentleman who says he’s not going to come out as an atheist until after his mother dies.”

In cities across the country, similar non-believer messages are cropping up on billboards, buses and subways. And although religious groups staunchly disagree, there has not been a major push urging the groups to take down the signs.

It turns out even hardcore, social conservatives are defending the right to free speech, even it the message is the antithesis of everything
they believe.

“Even though it’s fair to say that the Founding Fathers were more persuaded by Judeo-Christian values, I would say there were atheists even in the founding of our country. I see (the billboard) as an expression of the First Amendment,” says Kent Ostrander, executive director of the Family Foundation of Kentucky. “It may be an attack on religious faith, but America has always been open to those kinds of attacks, and it has always allowed for people to disagree.”