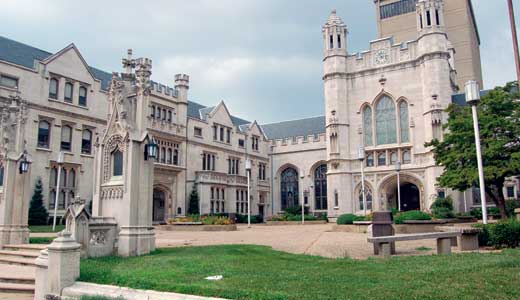 When Corey Mumpfort, 26, was attending Iroquois High School, he dreamed about becoming a doctor.

But then his mother was diagnosed with cirrhosis of the liver due to alcohol abuse, and that goal was put on hold. The then-17-year-old dropped out of school and took on a full-time job as a banquet server at the Galt House to pay for medical treatment and household bills.

In 2002 — the year he should have been graduating from high school — his mother died.

Eventually earning a GED, Mumpfort, who works at Presbyterian Community Center in Smoketown, now is hoping to fulfill his goal of becoming a doctor, having recently completed his first year at Jefferson Community and Technical College.

“There’s a need for more people who grew up in my type of background to do something positive in a community that needs it,” says Mumpfort, who is majoring in Health and Medical Preparation with the hope of eventually going on to medical school.

Long viewed as either a last resort or “second high school,” community colleges are shedding that unfavorable reputation and becoming the first choice for an increasing number of students. It’s a trend that’s due in large part to a lingering recession, skyrocketing tuition hikes at bigger universities, and a shaky job market. At JCTC, an expanding campus and new programs are adding to that surge in enrollment.

Last fall, JCTC saw a 4 percent increase in enrollment from the previous year, with nearly 15,000 students at its three campuses in Louisville and satellite facilities in Bullitt, Carroll and Shelby counties.

Despite seven straight years of student population growth, state lawmakers have slashed JCTC’s budget eight years in a row. And although repeated budget cuts are compromising future expansion, the college is on the brink of finishing construction of a new Allied Health building along Second Street, which will house classrooms and laboratories. It’s the first new building on the downtown campus in 32 years.

The addition is expected to attract even more students to the state’s largest community college, but JCTC officials fear they are lacking both the money and manpower to meet the need.

This year, for the first time, JCTC had a July 23 application deadline for incoming freshmen. Previously, new students could sign up until the first day of class. It’s another sign the campus is operating at capacity.

“We couldn’t hire more faculty to take on these courses, and it’s been really frustrating,” says Lisa Brosky, a JCTC spokeswoman. “Here we are, the open-access institution for the state (meaning all applicants are accepted), and yet we cannot accommodate all the students who want to come here because we don’t have the proper funding.”

The college begrudgingly raised tuition by $5 per credit hour last year, Brosky says, but still offers its associate’s degree programs at a modest $130 for each hour.

Even with the slight increase, JCTC officials credit their reasonable tuition as a reason more students are choosing two-year community colleges over pricy four-year universities.

“A lot are coming because tuition is more affordable here, and we’re seeing people who already have college credentials coming back to learn new skills,” Brosky says. “They see these education options as more recession-proof jobs that cannot be shipped overseas, and they want those new skills and trades.”

When it comes to higher education, Kentucky’s statistics are abysmal: According to 2008 U.S. census data, only 20 percent of residents in the state have a bachelor’s degree, bringing the bluegrass in at 47th in the country, ahead of only Arkansas, Mississippi and West Virginia.

For education officials seeking to reverse this troubling trend, the frontline is the Kentucky Community and Technical College System, which supervises the 16 different schools across the state where higher education begins for most Kentuckians.

Overall, KCTCS students represent more than half of the undergraduate students in all of Kentucky’s public postsecondary institutions combined. The two-year programs serve as an entry point for students seeking job skills, retraining or an easier transition to a four-year university.

“The community college plays a very different role today. For many looking to gain a foothold in higher education, it’s affordable, it’s close to home and it’s an accessible place,” says Teri Giltner, a KCTCS spokeswoman. “Everyone has to have some form of post-secondary education, but a good percent don’t need a full four-year degree. Many just need a certificate in a particular field or diploma from a technical program, and that’s where a lot of our growth is coming from.”

Similar to JCTC, enrollment numbers have jumped dramatically at community colleges across the state over the past decade.

This surge in registrations has helped improve the state’s poor report card. Over the past 10 years, Kentucky has seen a 32 percent increase in new bachelor’s degrees, according to the Council on Postsecondary Education, an agency that coordinates the state’s higher education policy.

In addition, community college officials were encouraged by an important step taken during this year’s legislative session in Frankfort.

The new law will take effect in the 2012-2013 academic year and establishes a statewide agreement between community colleges and four-year universities that provides students with a clearer understanding of which courses will apply toward a four-year degree.

The bill’s passage is important for JCTC students like Crystal Parrot, who plans to transfer to the University of Louisville and major in business next fall.

The 26-year-old sophomore attended the bill’s signing ceremony in April, and says that although she didn’t finish high school and took a hiatus after getting pregnant and earning her GED, the community college has been a bridge to better opportunities.

“I have a chance now, and that is the difference between having something and having nothing,” she says. “(The transfer bill) actually made me want to go to a university, and it was the missing link. I even got a couple of friends to sign up to go back to school here as a result.”