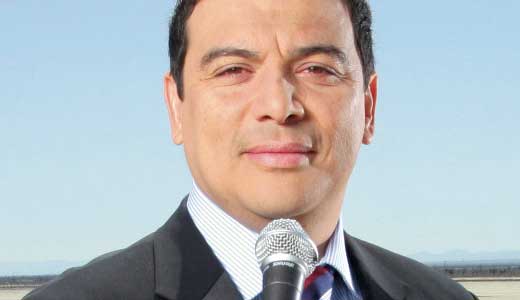 Carlos Mencia has a well-honed reputation for being one of the most controversial comedians of the past decade. His refusal to yield to political correctness led to the hit Comedy Central show “Mind of Mencia,” which ran for three seasons. He has toured all over the country, has been on every major network countless times, and has released numerous hit albums and DVDs. He’ll be here Thursday night for a rare, one-night-only appearance at The Improv.

LEO: As the 17th of 18 children, born in Honduras and raised in Los Angeles, does your upbringing still inspire your comedy?
Carlos Mencia: It always does. I describe my family like this: I love my family, I love ’em to death, I’d do anything for ’em — but I don’t like ’em. Ya’ know what I mean? When we sit down for Thanksgiving dinner, I literally look across at my entire family and think to myself: “Ya’ know, if these people weren’t my family, I would never choose to hang out with them.”

LEO: At one point, you were sent from L.A. to Honduras to avoid gang life …
CM: Yeah, but I really wasn’t in trouble … that kinda sucked. I was getting good grades and everything. Then they go: “You need to go to Honduras to stay outta trouble.” And I was like: “But I’m not in trouble.” And they’re like: “Yeah … but you might.” I couldn’t believe it — they were going to send me to a third-world country over something that might happen! So I went to live in the jungle for three years.

LEO: I had a friend who moved to Honduras and was held hostage at gunpoint for three days … is that really the best place to avoid trouble?
CM: Yeah, exactly! That’s my point. I had to survive like 10 hurricanes, floods, famine. I remember at one point, I literally ate bananas and rice for two weeks straight. And I’m just like: “I am an American! This is wrong, man!”

LEO: Who are your main influences?
CM: We all have our mentors, and we all emulate individuals we wanna be like. But to me, the person I wanted to be like most was my dad. I’ve always just wanted to be able to mimic that.

LEO: You’re headlining 30 shows in 30 days — that is a brutal itinerary. Why put yourself through that at this stage in your career?
CM: I don’t work for a living. Everyone calls it a job, but the truth is, when I was a kid, I had actual jobs — but since I started doing comedy, I haven’t worked a day in my life. I love what I do for a living. I wish everybody in the world could experience what it’s like to do what you were meant to do. The work has never been hard for me … honestly. I have a set goal. That is to take this two hours of material that I have right now and turn that into a one-hour special.

LEO: I would imagine that working with the USO, you often take away from it as much as the soldiers do. Is that accurate?
CM: I never joined the military, but I love this country a little differently than a lot of Americans. I come from another country, but I would not be the man I am without the United States of America. If I was in Honduras, I would be this talented, I would be this funny — but I’d be the funniest guy milking a cow. I wouldn’t be talking to you, I wouldn’t be doing a tour, and I wouldn’t be living in the comforts I live in now. And as the controversial guy, the politically incorrect guy, whatever the case is — I understand where my freedoms come from, and without that freedom I could never do what I do. For me, it’s my duty, as an American, to go perform for the troops.

LEO: Some of your fellow comedians went on a nasty slur campaign a while back. Was that a case of comics eating their own once one gets successful?
CM: Um, no … that’s what happens with any kind of success. The Internet takes it to another level, because the Internet is such a negative place. For me, it’s like this: When I wake up in the morning, am I gonna choose to live a negative life or a positive life? And whenever I’ve woken up and chosen a negative path … it’s bit me in the ass. One of my favorite books is “The Count of Monte Cristo” — the lesson of anger and vengeance destroys you as much as the person you wanna gain that vengeance from. I never engage in that. I wake up in the morning, and I thank God I have a career, and I thank God I have fans.