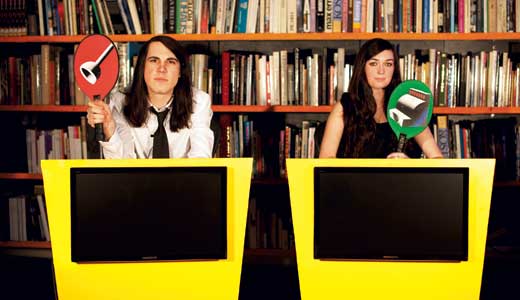 Since February, when they posted two homespun songs on Bandcamp, Cults, the New York duo of Brian Oblivion and girlfriend Madeline Follin, have thrown a band together on no notice for their maiden tour, fielded annoying questions from rock writers, filmed a video for Adult Swim, and generally avoided the whiplash that comes from being an “it” group.

“We just had to put everything on fast forward,” Oblivion says en route to a show in Lawrence, Kan., from Houston. “We only practiced for a month before our first show; we’ve only been a band for three months before our first tour.”

After their first gig, the van broke down in California in 104-degree weather. Kudos to Bob, the AAA mechanic who fixed ’em up. He wanted to know what music they played; Cults lied and said the blues. “We thought that’s what he wanted to hear,” Oblivion laughs. After the second show, Follin’s sore throat developed into strep. “We started out on a pretty low note, but we’re coming back.”

Oblivion and Follin had only fun in mind when they penned a couple of ethereal pop numbers on their Bandcamp site. “Go Outside” is snappy and harmless until you realize Follin’s near-soprano lilt overlays samples of speeches given by cult leader Jim Jones.

Adult Swim stumbled upon them and invited the band to submit a song for a singles compilation. Oblivion lied and said they had one ready, and then the two rushed to Follin’s stepdad’s recording studio in upstate New York and finished “OMG” in a day. They were the first ones to turn in their submission, Adult Swim gave them a treatment for a video and then shot it on a Brooklyn soundstage. “It was like a Kanye West video shoot,” Oblivion says.

“Go Outside” and “Most Wanted” appear on a vinyl 45 single from Forest Family, and a full-length album is in the works. “We’re experimenting with more hi-fi sounds,” Oblivion says. “We had a lot of songs from those same sessions. We want to keep the album cohesive and not treat our first record like our sophomore record.”