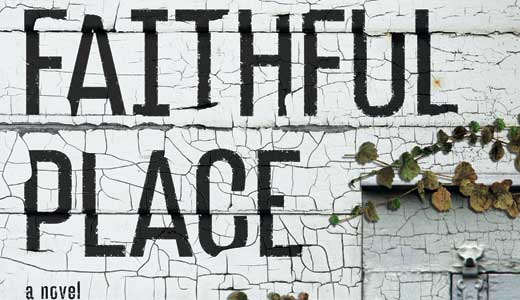 Is it possible for a book to be both a page-turner and a page-savorer? The very question provides us with an opportunity to consider the annoying word “page-turner” itself. Pages do not turn themselves. Readers do (unless they’re reading on the kind of electronic device that may one day render the term obsolete, making the gripes of a grammar maven like me redundant).

My point is that Tana French writes books that make you simultaneously want to fly through them to find out what in the world is going to happen next and linger over each page to see how she does what she does, especially with dialogue and voice.

Any novel that starts with the memory of the narrator’s drunken father telling him that the most important thing every man should know is what he would die for, followed by his admission that the thing he himself would die for is getting “that bitch Maggie Thatcher,” is one that’s got me hooked from the get-go.

“Faithful Place” is the third installment in a series of crime novels concerning a Dublin murder/undercover squad. Each of the three has so far focused on a different set of characters, so you won’t be lost if you read one on its own — though once you’ve read one you’ll undoubtedly want to read the lot.

That said, “Faithful Place” is the best of the three. The focus is on Frank Mackey, who, when he was 19 years old, schemed with his girlfriend, Rosie Daly, to elope to England to get as far away as they could from their families and their neighborhood, the Faithful Place of the title, where the highest ambition one could entertain was to land a job at the Guinness factory.

But when Rosie didn’t meet Frank on the night they’d agreed to abscond, Frank assumed she’d changed her mind. For 22 years, Frank, now an undercover detective, has stayed away from his childhood neighborhood, refusing to see anyone in his family other than his younger sister Jackie. When Jackie phones to tell him someone found Rosie’s suitcase hidden in an abandoned house (“Ah, Jaysus, Francis, would you ever pick up your bleeding phone, I need to talk to you, I’m not just ringing you for the laugh, do I ever?”), Frank does what Thomas Wolfe so long ago reminded us all not to do: He goes home again, delivering himself into one of the most gorgeously rendered hells ever put down on paper.

The story alternates between the depressed Ireland of the 1980s and the post-recession Ireland of now, after the fall of the Celtic Tiger — which never had much impact on Frank’s people or place anyway. They are a sad, scary, hilarious lot. They’re beyond Biblical.

It may be French’s training as an actor that makes her characters come alive so vividly on the page; or it may be that she has versed herself in the dialogue techniques of Roddy Doyle and the plot-twisting maneuvers of Donna Tartt; or it may just be that she is bursting at the seams with so much talent that you don’t know whether to write her a fan letter or hate her for being so good.

Whichever it is, the end result is a book that makes me want to hang my head in shame when I think of the badly written mega-bestsellers that don’t deserve their worldwide readership and, on the other hand, of the truly outstanding mysteries that are never considered for serious literary prizes.

“Faithful Place” is the most compelling book not just of its kind but of any kind I’ve read all year.