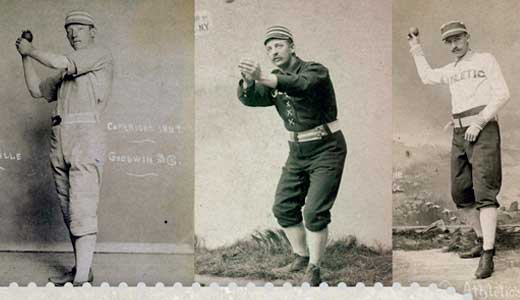 With most sports franchises, the “missing years” probably occurred sometime long ago in the misty past. But that’s not the case for baseball in Louisville, where the good old days are actually quite well known — and intertwined with the origins of the game itself. The birth of the National League? Happened right here in Louisville. The birth of the modern baseball bat? That happened here, too, when young Bud Hillerich turned the first Louisville Slugger bat for Pete Browning, the “Gladiator” of the Louisville Eclipse.

Author Philip Von Borries has covered the early years of Louisville baseball before. Von Borries’ latest book, “The Louisville Baseball Almanac” (History Press, 252 pgs., $24.99), attempts to cover an entire century and a half of Louisville baseball history. Luckily, its scope includes the missing middle years, which happen to be most of the 20th century. That’s the seven decades between the major league’s hurried departure, in 1899, and 1972, when the city’s long-running Louisville Colonels minor league franchise was tagged out at home.

Minor league baseball reappeared in a big way in Louisville in 1982, when local banker Dan Ulmer persuaded a baseball wheeler-dealer named A. Ray Smith to locate a Triple A team here. That franchise, operating first as the Louisville Redbirds, then RiverBats and now Bats, drew a million fans in 1983, and is now Louisville-owned and nested in a terrific downtown park called Slugger Field. But today’s Louisville Bats franchise possesses only the records attesting to its history; most of its past resides in the dusty memories of old-timers and graying baby boomers. More than a few remember Louisville aces Mickey McDermott and Juan Pizarro, or outfielders Jimmy Piersall and Willie Tasby. Some might even recall Willie Mays playing against Louisville with the Minneapolis Millers. And a rabid fan might recall the 1957 Louisville Colonels, who finished with an astonishingly horrible 49-105 record. The team that year was owned by a Cuban partnership that was probably most concerned with getting its money out of Cuba before Fidel Castro could rid the country of dictator Fulgencio Batista. They certainly didn’t spend anything on ballplayers.

Von Borries’ “Almanac” is far from smoothly written, but the research seems thorough, and previously missing history is now recorded.

Von Borries pays special attention to homegrown heroes Pee Wee Reese and Pete Browning. He hails Jay Kirke, who cracked 282 hits in 1921 — still a minor league record. We learn about Joe Guyon, the Chippewa Indian who was an All-American football player at Georgia Tech, before becoming the star of the Canton Bulldogs, the first great NFL team. Guyon is a member of both the college and pro football halls of fame. He could also hit, leading Louisville to a minor league championship in 1925, and was surely on his way to big league stardom before a knee injury ended his career. Guyon remained in Louisville, coaching football at St. Xavier High School, then working for the Colonels in the 1930s.

Then there was pitcher Jack Powell, who won 17 games for Louisville in 1913, and who won more games than any pitcher with a lifetime losing record: 245-254. He’s not to be confused, Von Borries notes, with another pitcher named Jack Powell, whose last words reportedly were, “Watch this!” as he choked to death in 1930 trying to eat an entire steak in one bite.

Author Rick Cushing celebrates the 50th anniversary of one of baseball’s best stories in “1960 Pittsburgh Pirates” (Dorrance Publishing, 421 pgs., $19). It’s a drama Cushing saw unfold as a 12-year-old boy brought to the ballpark by his grandfather, who worked at the Pirates’ Forbes Field.

A half-century later, Cushing beautifully reconstructs the story through newspaper accounts and extensive interviews with many of the living participants. It is those first-person accounts that carry the tale. The Pirates on center stage include Dick Groat, Don Hoak, Roberto Clemente, Bill Virdon, Vernon Law, Dick Stuart, Bill Mazeroski and manager Danny Murtaugh. They fight to the 1960 National League pennant during baseball’s “Golden Age” — leaving Mays, Aaron, Robinson and Koufax to find other years of glory — then face the gods of the game, the New York Yankees of Mantle, Maris, Berra, Ford and Stengel, in the World Series. Several of the series participants penned daily columns for the papers. Cushing blends the best of those with his own interviews and, along the way, drops in the events of the day to set the reader inside a baseball adventure that goes all the way to the bottom of the ninth in game seven.