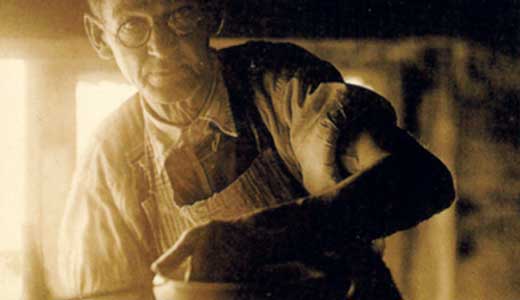 I blame Rookwood and Van Briggle — they’re the ones who got me hooked.

The ceramics of early 20th century American art pottery, a subcategory of the Arts and Craft movement, are popular collectibles. Many states with a good clay supply got in the act, including Ohio’s Rookwood and Colorado’s Van Briggle. “Clear as Mud” is the first book on the Kentucky art pottery movement. It goes in depth about Cornelison Bybee and the other Bybee companies (Bybee Pottery Co. of Lexington, Selden Bybee, Genuine Bybee), Waco and Kenton Hills Porcelains.

Louisville had its fair share of potteries, with some still in existence, such as the Louisville Pottery Co. (now Louisville Stoneware), Hadley and a Little Bit of Bybee in Middletown.

The book is by Louisville art dealers Warren and Julie Payne, who specialize in Kentucky art. Their knowledge was a source for the exhibition, “From Folk to Modern: Kentucky Pottery, 1900-1950” at the Speed Art Museum in 2007.

The definition of what constitutes art pottery is murky. I like how Ralph and Terry Kovel explain it in the introduction to their pivotal 1974 book, “The Kovels’ Collector’s Guide to American Art Pottery”: “After spending eight years researching the material for this book, we wonder if there can be any one definition for art pottery.”

“Clear as Mud” runs into the same problem trying to define art pottery in Kentucky. Warren Payne simply says, “You know it when you see it.”

Each chapter includes the history of the company as well as potters’ names, dates and marks. Collectors of a particular pottery’s wares wrote the chapters. “Those of us who are serious about our hobby are the first line of knowledge-gatherers,” explains Riley Humler in the introduction. “We fall in love with obscure objects, discover the history and cultural fabric surrounding those objects, and pass that information on so that those objects become the subject of museum exhibitions and scholarly writing.”

The title of the book is a bit tongue-in-cheek. The writers may not have been able to sort out the history of the various potteries, making the life of some of them, as they say, clear as mud.

The section on Louisville Pottery Co. by collector Stephen J. Lee is one of the more fleshed-out chapters. This ancestor of Louisville Stoneware was started in 1815 at Main and Jackson streets. It had an unusual and confusing mark, a profile of a Native American man encircled by the words “Cherokee Pottery” or “Louisville Pottery Company.”

“People swore up and down that Cherokee Pottery had to have been made in North Carolina by the Cherokees,” the Paynes write. “A letter from the tribe denied that assertion.”

The book has made me a convert. Looking at the wares in the gorgeous photographs makes me think I’ll be branching out to Kentucky art pottery in the near future.