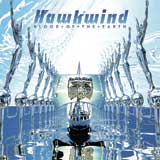 Hawkwind’s first studio album in five years is a mind-warp from the British psych titans, now working on their 41st year. And you don’t need LSD to enjoy it. There are no signs of wear and tear, or that the band, which counts Motorhead’s Lemmy Kilmister and Deep Purple’s Ginger Baker among its alums, has lost its knack for clever presentation. Not content with pop, rock or metal convention, Hawkwind contort and stretch all three on “Inner Visions,” “Comfy Chair” and a remake of 1971’s “Sweet Obsession.” Only experience shows on Blood, explaining why we have the Black Mountains and Black Angels of today. “You’d Better Believe It” (originally on 1974’s Hall of the Mountain Grill), “Sweet Obsession” (Dave Brock’s 1984 Earthed to the Ground), and the inclusion of late keyboardist Jason Stuart are tasteful nods to the past, made by a group who always tuned its thoughts to the future.