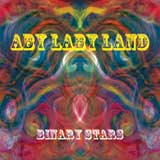 What appears to be a simple record is full of intricate, delicate technique. Aby•Laby•Land is back with their second record, Binary Stars, produced by Grammy nominee Fred Bogert, and is a rare gem so multifaceted it deceives as much as it rewards. The acoustic band shares its influences via folk, new grass, prog, even chamber elements. “An Evening With You” is perhaps the strongest moment, its vocals reminiscent of early morning Flaming Lips, while “Man’s Best Friend” has one of my favorite b-sections since the change-up in Prince’s “Computer Blue,” the deeply angular solo playing against the rest of the song’s lazy waltz. The disc has a beautiful sound: This is not a “local” sounding album, handicapped by budget restraints and the like. “The Drinking Gourd” is as high a quality of song as any you’re likely to hear this year. That’s two-for-two, fellas; now, to get the rest of the world to take notice.