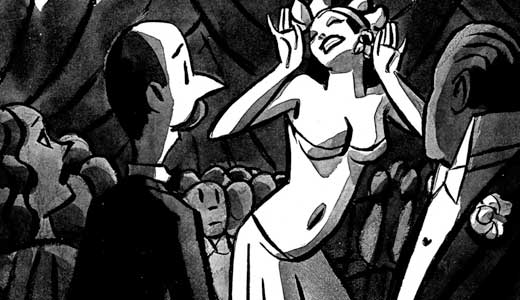 I never got to go to camp when I was a kid, and I always envied the kids who did. Not because of the cool things they’d get to do — the knots they’d learn to tie, the scary stories they’d tell around the fire, unlimited access to S’mores — but because they were away from their family long enough to write a letter home. It struck me after this weekend’s debauchery that I need to write a letter home. So much happened to my worldview that I really think my mom needs to know. So here it goes …

You always taught me to try everything once, right? I’ve always taken that lesson to heart, and that’s why I won’t go near peas or fish sticks to this day. Speaking of fish sticks, I went to my first titty bar Saturday, and I’m pretty sure that’ll be my last. (BTW: titty bar = strip club.) Don’t get me wrong — I enjoy the female form as much as the next frat boy. But I found the atmosphere to be creepy, pathetic and sad. It’s like I turned into a Republican for the night, no offense.

I went with a group of friends for a bachelorette party — not mine, don’t worry, still live in Kentucky (lol) — and we decided to buy the bride-to-be a lap dance. (Target was out of toasters.) You should see this place. Naked girls were scooting across the stage like Fluffy did when he had those worms. Oh, they were wearing 10-inch heels and a g-string, and they’d flash their yahoos at you if you were sitting close enough — all in search of one lousy dollar. I felt bad for the girls because the men were taking it so seriously. It was creepy. They’d get this concentrated stare on their face as the girl grinded her hips in front of them — it looked like they were doing heavy algebra in their heads or trying to beat Super Mario before the cheat book came out. Worst of all, the price of a beer was $5.50!

We scampered out of there fairly quickly, as I had run out of dollar bills and dignity. But lucky for us, The Connection was right around the corner, and it served as our saving grace. We sought shelter at the club’s nightly drag show and got a dose of what entertainment truly is. In fact, next time you guys are in town, I’ll have to take you. You see, Drag Queens are elegant. Drag Queens are beautiful. Drag Queens are talented. They know the power of mystery — they live the power of mystery. It’s not what you show, it’s what you don’t show that makes the magic. Just like when I was a kid, and you’d threaten me with, “I’m gonna tell your father!” The thought of telling Dad was far worse than anything he did when he found out I rammed the jet ski into the house boat, even though I still have trouble sitting for long distances. (lmao)

Unfortunately, I found out my favorite Drag Queen, Asia, recently retired. I was waiting for her all night like you would for Barry Manilow. But I guess it takes lots of work and upkeep to maintain a Drag Queen lifestyle. I’m thinking about trying it out for Halloween. Got any fishnets I can borrow?

Open Mic Night
By some strange force of nature, I am hosting an open mic night tonight at Bearno’s Highlands (1318 Bardstown Road, 456-4556). It starts at 8 and goes until about midnight, and it’s mainly for interested musicians looking to try their hand at the spotlight. However, I’m opening it up to comedians and poets, as I’ve got no musical bone in my body unless I’m sleeping with a musician. I’m going to dig up some bad poetry I wrote in high school to get things started — I vaguely remember an ode to cheese fries and Snicker pie. So come out, sign up and we’ll be fools together.

Drunk Texts of the Week
•I fucked him so hard, our kids will be born dizzy

•Hide ya kids, hide ya wife, u can run n tell that homeboy

Send your drunk texts to [email protected]. Check out my daily reasons to drink at barbelle.leoweekly.com.