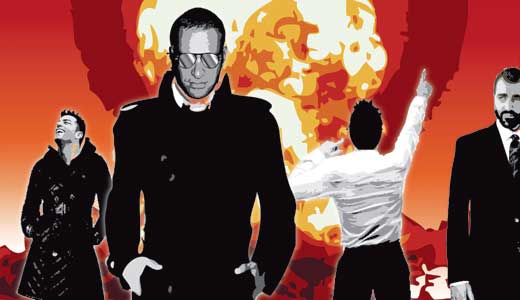 Most people might scoff at being called an agnostic, pessimistic hoarder, but artist Erik Underwood revels in it. In fact, it was these personality traits that led to the creation of his recent exhibit, “Holier Than Thou,” opening Friday at Day’s Coffee. The exhibit features eight graphic art depictions of the Bible’s heroes and villains in modern-day settings. Jesus is in a business suit, presumably on his way to the office. Satan is at an art auction and has just bought a painting of a stark landscape that reminds him of home. Gabriel, the archangel, is bathing himself in a public restroom. Mary Magdalene is quite the Heidi Fleiss. The portraits are colorful, multilayered and controversial.

Underwood says the idea for the show came when he was tinkering with a piece showing a naked man and woman on a beach. “It was supposed to be a beach landscape alone, but then I added a male and female figure,” he says. “The male figure, instead of looking at the sunset, was gazing at the female, while the female contemplated the sea and horizon. It struck me as an ironic twist on the myth of Adam and Eve, except in this case, Adam is saying, ‘God, I love her,’ while Eve ponders, ‘I wonder what else is out there.’ Religion has always been a hot-button issue for me, so that launched about a hundred ideas in my head.”

The artist credits his hoarding tendencies and the freedom working digitally provides with creating such detailed, engaging works. “Each completed piece is made up of a number of different pieces (a head here, an explosion there) I collect and manipulate, twist and generally molest. Most often, I have no idea how I might use the image at the time, but it usually winds up being perfect for something down the road.”

Although religion is often a taboo topic to mess with, Underwood stresses that this show stems from his personal beliefs, one of which is that religion is less significant today than it was in the past because of knowledge. “Knowledge is kicking faith’s ass because knowledge is concrete; faith is air,” he says. “I think our reliance on faith in general has waned considerably in the last 100 years because faith requires belief. Having proof lifts the burden and uncertainty of belief.”

Underwood hopes the pieces will spark healthy dialogue. To get that ball rolling, I had a few questions of my own.

LEO: Your photos depict the famous Christian figures as if they’ve adapted to our everyday lives. Why do the “good guys” seem so sad and apathetic, while the “bad guys” seem adjusted and happy?
Erik Underwood: I think that’s the way the world works. Call me a pessimist, but I just don’t see an overwhelming number of good guys finishing first. That can be discouraging. I also think it’s easier to be evil than it is to be good. Good takes work and dedication, which is why it’s ultimately so rewarding. Evil is easy … easy, vacuous and unfulfilling.

LEO: What business is Christ working for?
EU: I picture him high in a skyscraper surrounded by cubicles, crunching spreadsheets and watching the clock to see when his next coffee break rolls around. He hates it. There’s something crushing about knowing you can be so much more than what you are, while also realizing that no one really cares or will give you the chance. I can think of few things more tragic than unrealized potential.

LEO: I noticed you put yourself into the “Four Horsemen” and in “Antichrist.” Have you always identified with the bad guys?
EU: I was almost convinced I was the Antichrist for a brief period in my early 30s. I thought, “Jeez, if it’s anybody, it’s going to be me.” Some of my friends might agree. I have a very dark streak running through me, and I think it runs closer to the surface than I care to admit. But I haven’t given myself over to the dark side yet … even though they have better shoes. I’ve always sympathized with and related to “the villain” in any scenario because there has to be a reason why the villain does what he/she does in the same way that there has to be a reason why I do the crazy things I do.

LEO: Do you believe in heaven/hell?
EU: I don’t believe in religious dogma. I think humans are like any other organism on the planet — we die and our remains return to the earth. Many religions have this concept of heaven and hell, so it really speaks to the human fear surrounding death. I subscribe to the idea that, at some point down the road, I’m going to take a nap and just keep on nappin’.