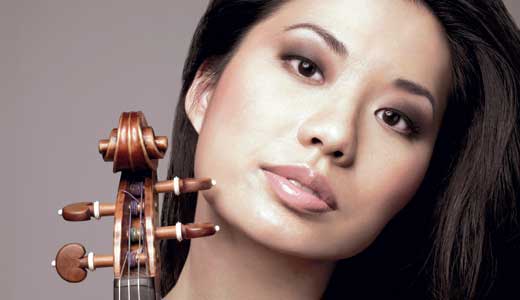 Type in “Mendelssohn Violin Concerto” on YouTube and the top video choice that pops up is Sarah Chang, performing the work 16 years ago in her debut with the New York Philharmonic — at the age of 13.

But that doesn’t seem to excite Miss Chang, who is now 29 and one of the top box office stars in classical music. “Ummm,” is all she says.

Nor does the news that the video clip has been viewed more than 1.2 million times.

But don’t get the idea that Chang, who will perform the famous Mendelssohn “Violin Concerto in E Minor” here with the Louisville Orchestra on Sept. 3 at Fanfara, is too blasé about her childhood to be interested. One figures she just regrets fans are hearing a version by a 13-year-old. That she’s probably a little more polished by now.

But it’s not the about the playing. Chang is rueing the moment.

“In that ugly green dress my mother made me when I was 13,” Chang says. “I don’t know what she was thinking. I look like a Christmas tree.”

But she can also smile about the memory.

“You know, when you’re 13, you’re not making decisions for yourself,” she laughs. “You don’t have a manager, you have a mother.”

Today, Chang is one of the most glamorous musical stars in the classical galaxy — garbed in sleek gowns that highlight her beauty and bathed by the limelight of the concert stage. Since those days as a child prodigy, her musical prowess has only grown. Today she has plenty of professional management, an EMI recording contract, a 100-date-per-year playing schedule — and all the other accouterments of globetrotting superstardom. Plus, she’s still happily tied to her mom and dad back home in Philadelphia. On an overseas tour last fall, Chang arranged for a satellite television hook-up in her dressing room — so she could follow the Philadelphia Phillies in the World Series. “They looked at me like I was cuckoo,” she remembers. “But I said, ‘You don’t understand, this is my team, and it’s very important. It’s the World Series!’” So for that moment, at least, international fame took a backseat to hometown charm. “That’s me,” she says. “A Philly girl.”

And, by the way, the Philly girl can play.

Start with the Mendelssohn. The solo violin enters the concerto in the first bar, and Chang confidently leads the orchestra on its way — soon skittering across the strings right up to the big note … where she hands things back to the conductor with a nod and a smile. Almost like a wink. Next she’s into the melodies, singing them like a soprano, carrying every eye — and ear — in the house along with her.

On another night, she steps down a staircase in Amsterdam to perform the Jean Sibelius Violin Concerto, her dress pale green and white, with shards of magenta — and a plunging neckline her mother would certainly not have chosen. Her bow touches the strings ever so slightly, and it is winter in Sibelius’ Finland. Chang flies up and down the strings, but it is not the melodic ripples of Mendelssohn. This is icy sound. Fragile droplets, frozen in the cold. You can see through the notes.

That’s the range of technique and colors of Sarah Chang. The speed, the warmth, the cold. The lushness, the austerity. The music of these pieces is written the same for every player. A few players captivate.

“Audiences are never wrong in the sense that someone has star quality,” says Louisville Orchestra music director Jorge Mester. “It is certainly communicated by Sarah Chang, and it is not by accident.”

Louisville Orchestra violist Jonathan Mueller has played previously with Chang when she soloed with the Aspen Festival Orchestra in Colorado. But his “association” with Chang dates backs years before.

“I think we’re about the same age,” Mueller says. “I remember when I was about 10 years old seeing her on television — and it was mind-boggling. That someone who was my age could play with a professional orchestra and play like that. Until then, I was just a student not thinking much about what I was doing, but she was an inspiration to me to become a musician.”

And thus Mueller has kind of lived along with Chang’s evolution from child prodigy to international starlet.

“I just remember she had these big, poofy dresses when she was 8 or 10 years old, and looked very elementary,” Mueller says. “Now everything is more refined, and she has added this flair to dress the part, to kind of embody how intensely she plays. She’s always been musically skilled, and I was thinking how appropriate that she comes on stage now in these very dramatic outfits. I remember one of the times I was playing with her, she had on a rich turquoise dress, very form-fitting. So she’s definitely embraced her star power, using her stature to elevate what goes into her playing.”

Of course, the outfits are only added flair for the fire. It’s music that fuels the flame. And Mueller says the Mendelssohn concerto ranks among the most famous of the repertoire.

“It’s the epitome of the violin concerto, to me,” he says. “Some people might say the Brahms (concerto), but the Mendelssohn trumps them all for the sheer melodity of it — a melodic line for the violin that is just so beautiful.”

“Everyone wants to put their own stamp on it,” agrees Chang. “It’s got the brilliant virtuosic element and beautiful melodies. And a kind of bubbly quality, as well.

“Surprisingly,” she adds, “it’s a piece that I have not played that often. It’s weird. I played it a lot as a child, then recorded it with the Berlin Philharmonic when I was 16. When we were thinking about selections for this season’s tour, I thought, ‘I haven’t played this in years, so let’s put it back in again.’”

Chang’s instrument is also a gem, a Guarneri del Gesu violin made in 1717 — thus nearly 300 years old. Guarneri violins rank as just as precious, perhaps, as those of fellow Cremona maker Antonius Stradivarius. There are many more Strads, however, and they are all similar, which affords the Strads a standard of excellence. There are far fewer Guarneris, and they vary greatly in size, shape and color, as the maker was constantly experimenting to gain the best sound.

Chang says her friend and mentor, the late Isaac Stern, helped her pick out the instrument.

Chang’s Guarneri does not at all resemble a Stradivarius. The latter are darker red-mahogany in color, while her Guarneri is less shiny, more golden in color, with very visible f holes. It’s also thin and kind of flat, with little arching. But it can pour out the sound — much as the famed Guarneri Del Gesu played by 19th-century virtuoso Nicolo Paganini. That one is called Il Cannoni, “The Cannon,” and is owned today by the city of Genoa in northern Italy.

“I actually got to play that violin when I was in Italy to play for the Paganini festival they have every year,” Chang says. “It’s a wonderful violin, but I have very small hands, and it’s just too big for me. I love my violin.”

The precious Guarneri (most likely worth millions) is not all Chang carries in her violin case. She’s also got four bows, snapshots of friends, a phone battery charger, a passport that’s nearly an inch thick, music, faxes and makeup — everything she needs, she says, if the plane delivers her and her violin to her next playing destination, but her bags find their way elsewhere. “I have enough of what I need to survive for 24 hours,” she explains, adding that if necessary, she can just run out and buy a concert gown for the performance.

“I’ve even been known to carry a change of cloths in my case for after the concert. Change clothes in the dressing room, then just roll up the concert dress in my case.”

She thinks about that for a second.