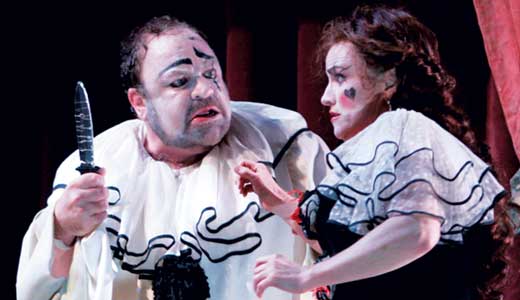 The notion that opera is so intimidating that the average person won’t attend is probably true. Even if it weren’t intimidating (with a high-end dress code and songs sung in foreign languages), it is likely only a small percentage of the population is ever going to be interested in hearing the fat lady sing. (Even if she’s thin.) It’s the same thing with art museums, ballet companies and chamber music societies. Fine arts groups eventually find out there is an interest gap — and a cultural gap — that is just too wide to bridge. They can work hard at demystifying their products — and should — but probably can’t compete with big-time sports and celebrity gossip for the attention of the masses. You can lead Homer Simpson to “Aida,” but you can’t make him buy a ticket.

Now that might not be the official party line at any Louisville musical or arts group — indeed, many work hard at building a wider patron base. But it seems to this observer that the best chance for arts success lies in making the art more pleasing for core audiences. In other words, make a play performed live as exciting for a theater fan as a big game for a basketball fan.

Which is something the Kentucky Opera does very well. One reason the local opera company finished in the black last year and enjoys strong support from its fans is because it helps them enjoy what they already love.

Good examples come up right away in the lead-up to Kentucky Opera’s first performances of the 2010-11 season, a twin bill of the smaller operas “Cavalleria Rusticana” and “I Pagliacci,” Sept. 24 and 26 at the Brown Theatre. The two are often performed together because of their brevity. (And perhaps because they’re both about wives cheating on their husbands.)

The first chance to learn more about the opening operas is “Lunch and Listen,” a noontime WUOL-FM radio show that will air Sept. 8. Kentucky Opera director David Roth hosts the event, with singers and directors currently in rehearsal talking about and singing selections from the next show. The program is quite lively, and fans enjoy being a part of the studio audience at 619 S. Fourth St. Attendees may also order a City Café box lunch (587-8681).

“Sights and Sounds,” on Sept. 12 at the Speed Museum auditorium, is an ongoing free program in which the Speed’s education staff works with the opera to present a multimedia show that explores the broader artistic and historical background of the operas — the sights of period paintings and film combined with the sounds, costumes and sets of the opera.

Other preview events are carded throughout the season. The company sends out a free CD to subscribers with selections from the upcoming opera, plus a magazine called Ovations with a full synopsis of the opera. Those also are available to non-subscribers by calling 587-8681.

Opera doesn’t just fall off the shelf into a shopping cart. It requires plenty of explanation. Most of the famous operas were written at least a century ago, and the composers often set their stories centuries before that — with the sort of kings and gods and murderous minions one just doesn’t run across much anymore. Plus impossible mistaken identities.

Roth says the previews are aimed at a wide audience.

“We want to enhance the experiences of both new and repeat audiences,” Roth says. “We want to provide an easy avenue of introduction for first-timers as we deepen paths of understanding for aficionados.”

Which is what the build-up is all about. “I venture to say we spend more time educating opera fans than we do performing for them,” he laughs.

After “Cavalleria” and “Pagliacci,” this season’s Italian flavor continues with the Donizetti comedy “The Elixir of Love,” Oct. 22 and 24, and the Puccini favorite, “Madame Butterfly,” Nov. 19 and 21. For more information, check out www.kyopera.org.