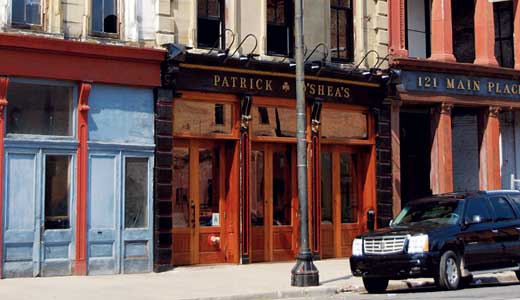 This is a David and Goliath story, or, to be more precise, Goliaths.

During all the noise surrounding the possible demolition of the buildings on Whiskey Row, Preservation Louisville Inc. was there fighting to save them. Their name says it all — they work to preserve Louisville’s past by saving its architecture. Part of what makes Louisville so charming is its abundance of historic properties.

Preservation Louisville isn’t even a mom-and-pop organization — it’s only a “mom.” Marianne P. Zickuhr is the executive director and sole employee of this historic preservation advocacy organization. She’s the David, armed with petitions, signs and impassioned volunteers, fighting all those Goliaths who want to destroy a part of our local history.

Luckily, she’s full of energy and loves her job. Her office is in the Brennan House historic home, an 1868 Italianate townhouse with a stunning Victorian interior original to the Brennan family. (While the building is not open for individual tours, they do offer group and educational tours by appointment — 631 S. Fifth St., 540-5146.)

“I’m at the right place at the right time,” Zickuhr says. “I hit the ground running, and it’s been non-stop ever since. I am so proud of the accomplishments of Preservation Louisville and the resource we have become for the Louisville community. I am proud to live in Kentucky, where we have the fourth largest number of entries on the National Register of Historic Places, proving Kentuckians love their history and heritage and understand the importance in preserving it.”

The group’s past accomplishments include helping secure landmark status for the Wayside Christian Mission properties on East Market Street, and Colonial Gardens and Bauer’s Restaurant in the Iroquois neighborhood.

“Over the last 40 years, the citizens of Louisville and Jefferson County have undertaken groundbreaking work in the field of historic preservation,” says Joanne Weeter, a preservation consultant and former historic preservation officer at Louisville Metro’s Landmarks Commission. “The city offers tremendous architectural quality and variety. It’s these resources that the historic preservation movement has sought to protect. It’s like being a social worker, but instead of people, it’s buildings. Buildings become very personal.”

But this city was missing a grassroots advocacy group, an immediate voice for the people. Preservation Louisville was formed in 2008, the result of much work on the part of local preservationists as well as the National Trust for Historic Preservation.

“The demise of Preservation Alliance in 2000 left a big hole in local preservation advocacy,” Weeter explains. “The (National Trust for Historic Preservation) recognized that void and partnered with Preservation Kentucky and the Kentucky Heritage Council to form Preservation Louisville … There was a real need.”

Zickuhr feels strongly that one of the nonprofit’s main jobs is to educate the public. “Hands on History” is a series that focuses on education in how to solve historic building problems, such as fixing the roof or windows. Many participants are interested in how to make a historic home “green.”

Architect Gary J. Kleier is a specialist in green renovation of historic buildings — his motto is: “The greenest building is the one that already exists.” He is on the Preservation Louisville board of directors and volunteers his time leading workshops.

“Preservation Louisville is an organization dedicated to education,” Kleier says. “As a specialist in preservation technology, I have seen everything from the unscrupulous contractor to the well-intentioned but unschooled homeowner and the horrible mistakes they make. This year, I am teaching four of our eight classes on understanding the technology of historic architecture. We feel the more people we can reach, the less likely they are to be scammed or make a mistake if they do the work themselves. We want to be known as their resource.”

Kleier sees the group as being a leading proponent for preservation in the community. “When an issue goes before the Landmarks Commission, or any other forum, the preservation community is frequently seen as obstructionist, making emotional arguments in the face of a well-organized presentation. Preservation Louisville has the ability to pull together specialists and organize a presentation that makes a succinct and logical counterpoint. Preservation Louisville feels it’s better to be seen as a partner rather than an adversary.”

The nonprofit also helped make changes to the Historic Preservation Tax Credit, and they now offer workshops on how to apply for it. “I’m particularly proud of that accomplishment,” Zickuhr says. “Our ideas come from need.”

“Preservation makes good sense and good cents,” Weeter says. “By that I mean that preserving what you already have is often a sound economic choice. If you have a historic building, it makes sense to rehab it. It also often makes good cents … to rehab a building using the … tax credits. Who wouldn’t want to get a 20-percent dollar-for-dollar credit on their federal or state income taxes for fixing up an old building? That’s a chunk of change.”

But what’s on people’s minds today, and what brought Preservation Louisville to the attention of most of the city, is Whiskey Row.

Each year, the group puts out its lists of “Top 10 Most Endangered Historic Places and Top 10 Preservation Successes” (see www.preservationlouisville.org for the entire list). The idea behind the lists is to let the public know the sites with historic, cultural or archaeological significance that are in danger or have been saved.

Whiskey Row managed to be on both lists.

The local landmark is a block of buildings at 101-133 W. Main St., known also as the Iron Quarter because of its cast-iron storefronts. (Louisville has the second largest concentration of cast-iron buildings in the United States, just behind New York City’s SoHo district.) Built between 1852-1905, some of the attached buildings were used by whiskey companies, hence the name.

Patrick O’Shea’s, a restaurant at 123 W. Main St. on Whiskey Row, received a 2010 Preservation Success award. Preservation Louisville honored the restaurant because it “shows what the Whiskey Row Historic District could become with the right vision and investment.”

On the flip side are the structures at 105-119 W. Main St. Preservation Louisville drew enough attention to the plight of these buildings that they were designated “local landmarks” by the Landmarks Commission on June 28. That forced owner/developer Todd Blue, who bought the buildings in 2007, and his company Cobalt Ventures to stop demolition plans. Any future changes to the architecture must be submitted to the Landmarks Commission and the Waterfront Review Overlay. As a result, Cobalt Ventures is suing Louisville Metro, claiming the buildings are a public safety hazard. While the outcome of that suit is pending, Blue has proposed an alternate plan that would save only the cast-iron facades.

Most of the support to save Whiskey Row came through the Preservation Louisville website. They received more than 1,000 signatures on the online petitions. But Zickuhr stresses not all those who signed the petitions became members. “We need them to be members, for this fight is going to continue. Like any small, grassroots nonprofit organization, we are powered by the generosity of our members. I hope that since preservation has recently been on the minds of many of us here in Louisville, we remember to support organizations like Preservation Louisville and what they mean to our community.”

Another endangered building style is the ubiquitous shotgun house, largely built between 1865-1910. Louisville has the most shotgun houses in the nation (we were behind New Orleans, but many of that city’s shotguns were destroyed in Hurricane Katrina). More than 10 percent of the houses in Louisville are shotguns, located in such neighborhoods as Germantown, Portland and California.

This fall, Preservation Louisville plans to roll out the new program Save Our Shotguns (SOS), a collaboration with Habitat for Humanity. Louisville has one of the largest Habitat markets in the country.

Shotguns have their own success story in the Thomas Edison House in Butchertown. The double-shotgun house was home to Edison when he worked for Western Union as a telegraph operator from 1866-67.

Preservation Louisville knows cast-iron storefronts and shotgun houses help make Louisville a unique city. But why do they and other preservation organizations have to fight the good fight over and over again?