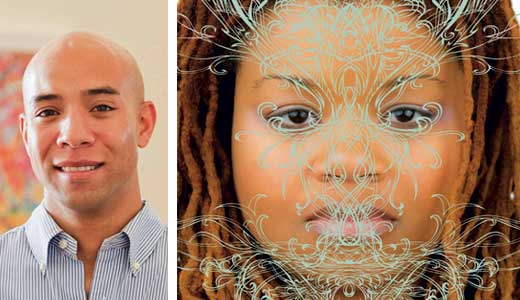 Growing up, Bryce Hudson’s identity was questioned on a regular basis. The summer sun would flush his hair of any darkness while his skin took a golden brown tone. Even now in his adult life, he finds people attempt to place him in categories where he doesn’t belong.

The questions he’s faced in his lifetime, coupled with his own uncertainties of self-image, have inspired much of his work. His fascination to broaden his artistic scope, coupled with his raw talent, makes up his newest exhibit, “Presentation,” now showing at the Green Building Gallery.

“I am of a mixed-race background, and to the common, suburban, upper-middle class white kid, I looked different,” Hudson says. “Was I black? They didn’t know … it’s been like that my entire life.”

“Presentation” features art from three series, including the “Beauties” series where he explores an interest in images of the individual. He used the people featured in Jet magazine’s “Beauties of the Week” category and digitally imposed his face on the bodies.

His exploration into his own racial heritage inspired the works for the “Kentucky Gentleman” series. Working with a makeup artist at Actors Theatre, Hudson masterfully dissected his own identity through disguise. His transformation into nine different races fed commonly understood stereotypes while posing questions about perceptions of self and others.

In his “Holding Pattern” series, he uses headshots of women in their mid 20s and 30s and superimposes decorative patterns on their faces, exposing the ideas of symmetry and femininity. Each pattern enhances the face in its own unique way, bringing the beauty of the women out in new ways.

Whereas other artists might manipulate such subject matter for shock value, Hudson doesn’t look for any specific reaction. An appreciation for diverse audience reactions fuels his fire.

“There’s not necessarily an emotion I’m seeking to evoke,” he says. “I just want someone to think about it. I don’t want it to just be a pretty picture.”

Hudson’s drive to create more than just a pretty picture led to the development of this exhibit. The “Equilibrium (Deco)” series began as paintings with no pattern on top. He retooled these paintings into screenprints and digital prints and placed the pattern on top in order to create an image with repetition and simplicity. With the “Holding Pattern” series, Hudson worked with people as subjects for the first time. His close relationships with women and his many travels helped him find inspiration.

Hudson’s philosophy is simple: Experimentation and evolution are essential to artistic development. As he continues to push himself in new directions, he stays true to this mantra.

“I’m really uncomfortable when I see an artist or meet an artist that picks up one thing and just sticks to it,” Hudson says. “Someone’s work that doesn’t change and isn’t fed by outside influences — that’s worked for a whole lot of people, but things start to look the same. You don’t want to become bored in life. It’s my philosophy — it’s what I appreciate in others, and it’s what works for me.”

It’s easy to assume Hudson would want to take some time to digest his newest show and the works he created, but he doesn’t seem to operate with a stop button. His next task is working with glass and ceramic pieces. Though he’s seen it done before, he’s never experimented with the techniques and is eager to try something new. It is important for him to continue to challenge the boundaries of art and test his limitations as an artist in a world that is constantly evolving.

While some people express themselves through words, Bryce Hudson does so through molding pieces that make viewers think. He doesn’t create art to please, but to present a thought, a feeling, a message.

“This is what I am presenting, and people can choose to look at them,” he says. “I really hope people choose to dive in a little bit further … you can always glance at something and take it at face value, but what I always hope is that people will get into it. It’s the same with music — you may really like a song and you can take it as ‘that’s my song,’ or you can take it because it connects with you on some level. So, I mean, it’s the viewer, it’s really their decision how much they want to take from it. They can take all they want.”