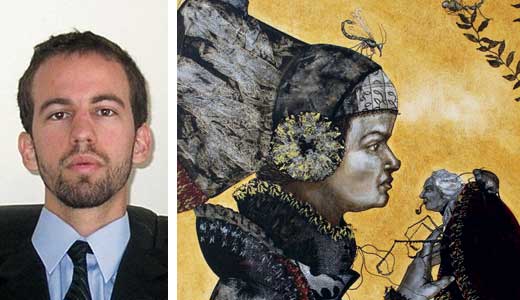 Carlos Gamez de Francisco has had a lifelong preoccupation with his craft.

Despite having little means growing up, the Cuban-born artist managed to find ways to pursue his childhood penchant for painting — using scrap pieces of wood for paper, elementary school watercolors, and even relying on toothpaste when he needed white.

Fast-forward 22 years, and you will find a timid man in front of a 7-foot masterpiece on canvass. He has shown his work in Cuba, Spain, Miami and now Louisville, with an exhibit at the Pyro Gallery, his 37th show. He also is preparing to become the Muhammad Ali Center’s next Dream Makers Artist in Residence.

Francisco based the theme of his upcoming show at the Muhammad Ali Center on Louisville’s namesake — Louis XVI — with roughly 35 pieces centered on the infamous king and the French Revolution. The vivid images captivate with splatters of ink and watercolor surrounded by the hard and detailed lines of his pencil. Much like the man himself, the art is both hard and soft — a combination of rigid lines and unrestricted movement.

On most days, Francisco spends about 10 hours creating art.

“I decided when I was 16 that I was going to be an artist,” Francisco says. But painting was far from his main focus when he first began pursuing the arts, having originally studied dance at a fine arts school in his hometown of Holguin, Cuba. After two years, however, he abandoned dancing and refocused his efforts. “I felt more comfortable painting. I was very shy, but painting is just you in front of the canvass.”

That same year, the aspiring artist decided to pursue his art in America, with the hope of eventually settling in New York City. But getting there proved difficult.

In Cuba, a finite number of visas are issued via an annual lottery; it was five years before Francisco obtained one. When he finally landed in the United States, it was a culture shock, a struggle reflected in his artwork, which in the beginning was dominated by severe, gray backgrounds and pictures of stereotypical Americans. “When I came to the United States, I painted very aggressive paintings,” Francisco says. “I felt weird because this place was so different.”

Rather than end up in New York as originally planned, Francisco moved to Louisville, where his father and younger sister had settled five years earlier. He immediately found a job at a warehouse and painted on the side.

Eventually, his career as an artist picked up steam: He showed at the Graciela Perrone Gallery, became a member of the Pyro Gallery, was tapped by the Muhammad Ali Center, and just recently sold a collection of paintings to 21c.

As a result, he has since quit the warehouse gig and is painting full-time.

A varied background in dance, film and classical painting makes his artwork unique. Whether it’s the stark mix of pencil and watercolor, or the deep hues and comical facial expressions in his oil paintings, there’s something inexplicably mesmerizing about his work.

“My hobby and my work are the same. I never feel bored when I paint,” he says. “I paint when I watch a movie, listen to music, talk to friends. I’m always working on art, even if I’m just watching a movie, I’m looking for ideas.”

As for the future, Francisco says he will always continue to paint, but he is interested in exploring other artistic outlets, like possibly making short films. “Because I studied dance in the beginning, and I had to take art classes and music classes, I feel like I don’t have to always paint.”