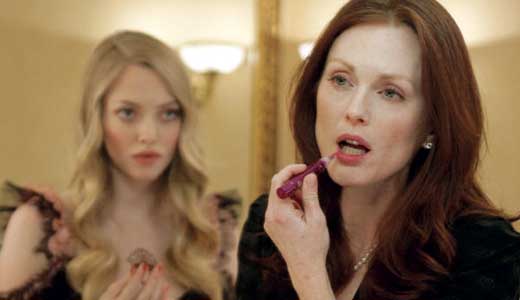 Julianne Moore — who plays crazy chicks better than any crazy chick we know — imagines her hubby (Liam Neeson) is having an affair. So — in logic only a redhead could dream up — she hires hot little “escort” Amanda Seyfried to seduce him. A surprisingly pandering flick from art-house wunderkind Atom Egoyan. A voyeuristic fun ride with a weak ending, but worth checking out if only for Seyfried’s, er, talents.

DIARY OF A NYMPHOMANIAC

Meant to be a torn-from-tomorrow’s-newspaper espionage thriller, this James Van Der Beek/Wendy Crewson vehicle aims high (with John Heard doing his patented guy-who-knows-what’s-really-going-on character) but gets in too deep to clearly explain the real-world genocide and global cover-up by the U.S. and Chinese governments. Worth checking out if you’re into that sort of thing.

Not so much a “tale” as a character study, with Ben Stiller doing his patented unstable neurotic to “mumblecore”-darling Greta Gerwig’s aimless enigma. (She was great in “Baghead.”) Not for everyone, but this movie is so different from anything you’ve seen before that you might just watch it twice. With Jennifer Jason Leigh, Rhys Ifans, Chris Messina and Susan Traylor.

An oddly wonderful coming-of-age tale about a young Jewish girl (first-timer Danielle Catanzariti) who explores life with an offbeat curiosity. Trapped at a strict private school, she befriends Keisha Castle-Hughes (“Whale Rider”) and her mom, Toni Collette, who secretly enroll her in a public school as a “foreign exchange student.” Trust us, this is gangs and gangs of fun for pre-teens, teens and adults.

A kinda weird family comedy-drama about a pair of teens (Anton “Star Trek” Yelchin and Eva “Californication” Amurri) who work at a water park while devising a dangerous venture to raise money for college. With Susan Sarandon as the flaky, thieving mom, and breathtaking Willa “Legion” Holland as the sexy younger sister.

A black man (Lance Gross) falls in love with a Latino woman (America Ferrera). They decide to marry, but worry, “Can our crazy families get past their racial tensions and wish us a happy life together?” Sappy movie with a great cast including Forest Whitaker, Carlos Mencia, Regina King, Diana-Maria Riva and Shannyn Sossamon. Better than it sounds.

A real nice anime outing that deserves more exposure. Juliet has always hidden in plain sight as a boy, or more to the point, a masked crusader who fights for justice in the dank alleyways of Neo Verona. That is, until she meets hunky Romeo, a young man of the upper class whose family may be responsible for all manner of oppression. You can take it from there.

Former gambler Steve Buscemi has kissed his sordid past goodbye to become a respectable claims adjuster in Albuquerque, N.M. But his boss, Peter Dinklage, gives him a scary chance for promotion: Prove that Vegas stripper Emmanuelle Chriqui is faking her injuries. It’s all a play on Dante’s Inferno; wonderfully odd with Sarah Silverman, John Cho and Tim Blake Nelson.

Gerard Butler — who we are REALLY getting tired of — plays the luckiest down-on-his-luck bounty hunter in history. Not only does he get to bring in his ex-wife, kicking and screaming, but his ex-wife is Jennifer Aniston! The rest of the movie is just one slapstick routine after another (which Jenny excels at), with the long-expected happy ending. The best reason to watch? Aniston is looking goooood. At 40 years and counting, this babe still has the body and face (and comic timing) of a 20-year-old. Don’t know how she does it. Don’t care. As long as she keeps at it. A fun little movie; a great date flick.

This big-time hit from the Sundance Film Festival stars Pierce Brosnan (in possibly his best work ever) and Susan Sarandon as the happily married parents of Aaron Johnson. But when Johnson is killed in a car wreck — and space-cadet Carey Mulligan shows up carrying his unborn child — they all go through a voyage of discovery. A solid drama that doesn’t flinch at pain.

While this USA Channel series doesn’t have the charisma of “Burn Notice” or “Royal Pains,” the relationship between FBI Agent Tim DeKay and suave master-crook Matthew Bomer — sprung from prison to trap other crooks — is excellent. Of course, having gorgeous Tiffani Thiessen strut around at strategic moments don’t hurt none either. A guilty pleasure of ours.