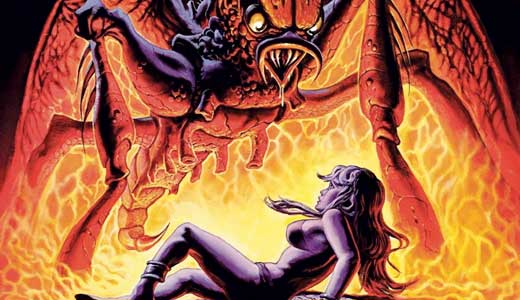 Never before available on DVD or Blu-Ray, Roger Corman’s savagely sexy sci-fi culter in both its remastered theatrical form and an unrated director’s cut. Jesse Vint plays an interstellar bounty hunter, contracted to rein in a man-made man-eating life-form on the planet Xarbia. With the help of June Chadwick and Dawn Dunlap, he barely has time to get his clothes off before Subject 20 has reduced the laboratory staff to a meager few — and one of them is dying of cancer! How will he save the universe from this monster? Replete with great bonus goodies by Robert Skotak and others. A must-own.

A wildly popular South Korean horror flick about a grad student whose life hasn’t exactly taken off yet. He’s unemployed, with a baby on the way. And to top it off, there’s a damn dog somewhere in his apartment building that just won’t shut up! He finally goes nutzoid with horribly unexpected results. Cool.

BEING HUMAN: SEASON ONE

A trio of Limey 20-somethings share a Bristol flat and try to get along. The catch? One is a vampire, one is a werewolf, and the other is a ghost. But hey, just ’cause you’re not human doesn’t mean you don’t have to make a living and pay the rent … you know? Witty, sexy, droll and insightful as only the BBC can do it.

Courage the Cowardly Dog is one of our all-time favorite cartoon characters, and we are proud to announce this, his first release in CN’s Hall of Fame series. Place: the middle of Nowhere, Kansas; Population: one kind old lady, one crabby old man, one timid dog … and all manner of nightmarish threats that only Courage seems to be aware of. These minimalist odes to slapstick survival are simply genius, each a minor masterpiece of storytelling. Worth collecting.

Originally to be titled “A Couple of Dicks,” Bruce Willis and Tracy Morgan trash the buddy-cop format under the helm of Kevin Smith. They’re on the hunt for a stolen baseball card, but that’s just an excuse for excessive speed, violence, profanity and the kind of loose, make-it-up-as-we-go shenanigans that are Smith’s trademark. Big dumb fun with Jason Lee, Michelle Trachtenberg, Seann William Scott and Kevin Pollak.

GODKILLER: WALK AMONG US

The latest “illustrated film” melding minimalist animation with sequential art, 3-D CGI and motion graphics. Dunno … still sounds like an awfully lazy way to bring a graphic novel to video. Anyway, Matt Pizzolo’s infamous tale of love, death and organ harvesting comes to a TV near you as a 16-year-old struggles to find a replacement heart for his sister amid a post-apocalyptic wasteland full of fallen gods, punk music and cyber-sex addicts.

Another terrific indie no-budget organ-harvesting horro-thriller. This one has an evil corporate-type with an army of demons, determined to corner the black market in body parts. Wonderfully, wonderfully bad.

Big, noisy, “A-Team”-styled actioner about an elite Special Forces unit, betrayed and set up to take the fall for a mission designed to go bad. Escaping with their lives, Jeffrey Dean Morgan, Chris Evans, Idris Elba and the rest are approached by sexy Zoë Saldana, who has her own plans for revenge. It is Saldana who ultimately saves this flick from being just another loud dumb actioner. Not perfect, but definitely recommended.

THE MOST DANGEROUS MAN IN AMERICA: DANIEL ELLSBERG AND THE PENTAGON PAPERS

Long-awaited video release of this Oscar-nominated doc on Daniel Ellsberg. He was the Pentagon official who discovered in 1971 that the Vietnam War was a scam — a deceit carefully scripted to cover up America’s other, more outrageous illegal actions in Indo-China. So he leaked top secret documents to the news media, nearly costing own life. An inspiring story of true moral courage.

Kristen Stewart and Dakota Fanning are SMOKIN’ in this biodoc of Joan Jett and Cherie Currie, founding members of the all-grrrrl rock band The Runaways. Michael Shannon plays Kim Fowley, the sleazy impresario who brought the band together and drove them headlong into a maelstrom of drugs, sex, binges and violence that none of them was prepared for. The end result: one of the most spectacular flame-outs in the history of rock ’n’ roll. And it’s captured perfectly here, music and all. Simply awesome.

A charming, family-friendly culture class about a proud Italian gentleman who takes a once-in-a-lifetime trip to see his nephew (Joe Mantegna) and family in Illinois.