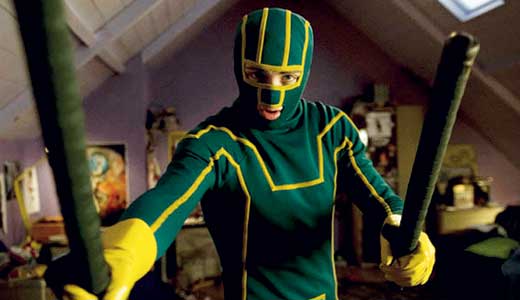 Mesmerizing, intelligent and ultra-violent French film about an illiterate part-Arab convict who learns to survive in a savage prison by becoming the protégé of the prison’s ruling Corsican gang leader. Nominated for an Oscar and winner of many international awards, this is as dark, dangerous and gritty a movie as we’ve ever seen. Recommended.

This hilarious and hyperactive “crazy-assed kids who think they are superheroes” actioner is vulgar, violent and very entertaining. Based on a comic book, skinny teen-idiot Aaron Johnson puts on a stupid green costume to become the titular not-so-super crime fighter. But the movie belongs to Hit Girl (Chloe Moretz), the obscenity-spouting martial-arts offspring of (ugh) Nicolas Cage. Together they take on evildoer Mark Strong — whose son also longs to be a caped crusader. An over-the-top live-action cartoon if we ever saw one. Appropriately rated “R” for truly perverse profanity and realistic violence. Not to be missed.

Considering the cast, it’s amazing no one has ever heard of this film. Liam Neeson is a mortician who can converse freely with the dead — but only until the time they are buried. His latest decaying friend is Christina Ricci, who won’t accept that she is dead after wrecking her car following an argument with boyfriend Justin Long. Or maybe she isn’t dead and Neeson just wants to bury her alive. A bit claustrophobic, but we liked it. The eerily awful music is by Paul Haslinger, formerly of Tangerine Dream.

A cheapo double feature from the incomparable Roger Corman. The first is his follow-up to “Death Race 2000” with David Carradine and the jaw-dropping Claudia Jennings, who — thank you, God! — gets nekkid and tortured by barbarian cannibals with great taste in women. The second is better known as “Warlords of the 21st Century,” a staple from the early days of cable TV, now available for the first time on DVD.

DIARY OF A WIMPY KID

First chapter from Jeff Kinney’s popular kid’s series. Zachary Gordon is simply terrific as the new middle-schooler, struggling to find his place amid all the baffling social intrigue, buoyed by an embarrassing array of friends — including a girl (OMG!) who writes for the school paper and tells him that popularity isn’t all it’s cracked up to be. Truly excellent; too good for kids.

Never before available on a DVD single, this was the movie that killed off the second-generation Godzilla and marked the end of Tomoyuki Tanaka, who had produced all of the Godzilla movies up to this point. Our scaly hero battles a horde of monsters made from his own cells, mutated by the original Oxygen Destroyer, while his internal nuclear fire goes critical. Can Godzilla Jr. save the world?

HUMANOIDS FROM THE DEEP

An extraordinary and wildly entertaining martial-arts fantasy from director Tang Chia, former fight choreographer for many of the Shaw Bros. finest films. An infant prince is adopted by a trio of bizarre monks, imprisoned with them for 20 years. But what a trio! Only seen in America as the much-edited “Death Mask of the Ninja,” this is a must-own for any fan of chop-socky cinema.

Roman Polanksi’s long-overdue return to film direction stars Ewan McGregor as a writer, hired to pen the memoirs of a popular British PM, Pierce Brosnan. But it seems he got the gig because the first writer committed suicide. Hmmm. And then there are the things McGregor uncovers during his research. Is the prime minister crooked? Is he a murderer? Is he a war criminal?! Polanski manipulates this cat-and-mouse relationship between the two so beautifully that you truly begin to feel the growing disgust and terror that takes hold of McGregor. Simply brilliant.

TO SAVE A LIFE

We’re not big on the Christian film genre. They tend to be preachy, exclusive and, well, boring. But this one is first and foremost an intelligent teen drama, and never stoops to Sunday sermons and our-way-or-the-highway demagoguery. A happy, popular young man (Randy Wayne) blissfully plays basketball and drinks beer with his buds until a childhood friend commits suicide. This sets him thinking, “Why didn’t I see this coming?” “What could I have done?” And, most importantly, “Am I responsible in some way?” This sends him into an introspective quest for meaning, leading eventually to Christianity. By the end, he knows that, while this may not be his ultimate answer, for now it helps to have someone with whom he can talk about such things.