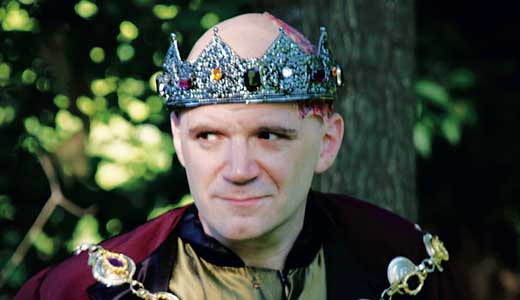 The Tragedy of Richard III
A production by the Kentucky Shakespeare Festival. Directed by Matt Wallace. Continues through July 11 in the C. Douglas Ramey Amphitheatre at Central Park, 1350 S. Fourth St. Admission is free. For more information, go to www.kyshakes.org or call 637-4933.

“The Tragedy of King Richard the Third” is arguably the most troubling work in the Shakespeare canon: brutal, cynical and populated by a set of nobles as ignoble as can be imagined. It’s a play nearly devoid of poetry — except for the scorching poetry of invective and contempt. It’s a play where even the heroic couplets Shakespeare employed elsewhere to lend a resounding cadence to the ends of scenes and soliloquies, here have the ugly clang of a broken bell.

And yet, when winningly performed — as in the current Kentucky Shakespeare Festival production running at the C. Douglas Ramey Amphitheatre in Central Park — it makes for grand, juicy theater with plenty of emotional spectacle on display.

The story is simple enough: cruel, remorseless, misshapen Richard (Brian Hinds) will stop at nothing to become King of England. And because the obstacles that stand in his way are mostly members of his family dynasty, the House of York, his path to power will necessarily be stained by the blood of blood relatives.

From the outset, Hinds, like all of director Matt Wallace’s cast, brings a ferocious clarity to the stage. Rather than trap himself in flowing iambic rhythms, he delivers the opening soliloquy, “Now is the winter of our discontent …” in staggered bursts of sound, as jagged and uncomfortable as Richard’s limping gait. And as he broadly touts Richard’s unabashed villainy, he pulls the audience into his smirking, Machiavellian schemes through well-paced wit and humor, couched in gestures broad enough to be seen even at the back of the theater — though patrons are well-advised to sit up close, where they can see the madness that lurks in his eyes and grin.

The rest of the cast brings similar rigorous clarity to the affair — an important achievement in an outdoor theater in an urban environment. The women who suffer at Richard’s hands, and who are then boldly manipulated by him (Tiffany La Voie as Lady Anne, Georgette Kleier as the Duchess of York, Abi Van Andel as Queen Elizabeth) are, by turns, as uninhibited in their grief as in their anger. And when it comes to sound and fury, Abigail Baily Maupin’s portrayal of Queen Margaret is among the best Shakespearean performances seen in Louisville in recent years: Every beat of every curse she rains down upon Richard is masterfully bold and brilliantly shaded. And when, in the midst of her madness she positively croons her prophesy to Queen Elizabeth, “Fool, fool! Thou whetst a knife to kill thyself,” it’s easy to agree with Buckingham (Gregory Maupin), moments later when he says, “My hair doth stand on end to hear her curses.”

Buckingham is a prototypical courtier — the sort of spin doctor and political counselor that’s grown ubiquitous in the age of cable news. That Shakespeare could invent such a character 400 years ago suggests that vice, greed, ambition (and naïve susceptibility) are changeless commodities. And the other men in “Richard III” (most members of the cast are double or triple cast) evidence the same: Monte Priddy as King Edward IV, Michael Tolfo as hapless George, Michael Toth as Rivers and Dathan Hooper as Hastings. Even the lesser and younger members of the court, all fodder for Richard’s schemes, make their marks in this satisfying production: Rebecca Sauer, Ryan DeLaney, Henry Miller, Brier Bracken, Hannah Shelby, Alfred Dale Jones Jr. and Patrick Zakem.