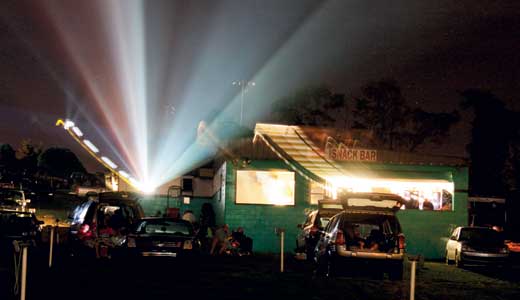 Remember that iconic scene in “Grease” when Sandy strands Danny at the drive-in and Rizzo announces she might be knocked up, all while cartoon concession treats sing and dance on the movie screen? There were no cumbersome 3-D glasses. No air-conditioning blasted at arctic temperatures. Just your ’55 Chevy, your girlfriend and a milkshake (or maybe a flask if you were feeling rowdy).

Fast forward several decades, swap out the Chevy for a Honda, and you can find that same charming cinematic experience under the stars, although your options are limited these days. The last of Louisville’s drive-in movie theaters — Kenwood Drive-In in the South End — closed last year, outliving other outdoor cinemas that had long-operated on Dixie Highway, International Turnpike, Preston Highway, and just across the river in Clarksville.

Since the heyday of drive-ins in the late 1950s and early 1960s, the popularity of this uniquely American phenomenon has plummeted. At its peak, there were an estimated 5,000 drive-ins operating in the United States. Today, there are less than 500.

That said, if you want to take in a film from the comfort of your car, you’ll have to head to Georgetown, Ind., home to the last remaining drive-in in the Metro region.

Tucked beneath one of those knobs in the foothills of Southern Indiana, the Georgetown Drive-In stands as a local monument to the past, although this two-screen theater — offering a mix of newly released films, cinematic classics and special events — is attracting solid crowds these days due to a renewed interest in drive-ins and, truth be told, a dearth of other venues.

On weekends from April through October, cars often are backed up along state Route 64, waiting to pull into the vast, dusty lot.

Floyd County native Natalie Klein, 20, no longer resides in Indiana, but the college student still makes it a point to visit the drive-in of her youth when she returns home to see family.

“I’ve been going to the drive-in for as long as I can remember,” she says. “I vividly remember always seeing my first movie on screen one, then going back to the second screen for the second movie. By that time, I would go on the roof of my dad’s 4-Runner and fall asleep on a blanket.”

Opened in 1951, the Georgetown Drive-In has changed ownership only once — it’s been in Bill Powell’s family now for 45 years.

In search of a lucrative business venture back in 1965, Powell’s parents bought the Georgetown Drive-In on a whim. The move proved successful, and the business eventually was passed on to the next generation. To this day, it remains a family-run operation, with Bill Powell’s wife, Karen, and children helping with everything from concession and ticket sales to running the projectors.

“I always used to joke that this was his other girlfriend,” Karen says about her husband’s dedication to keeping the place going all these years.

As Bill Powell puts it, “There’s no other place like this anymore.”

And as a result, drive-in lovers are willing to travel far to get their nostalgic movie fix. On a recent Friday night, Ryan Kahl drove 45 minutes from his Bullitt County home to see an outdoor double feature.

“Well it’s the only one anywhere around here, and I like the drive-in better than I like movie theaters,” he says, waiting in line at the concession stand after watching “Toy Story 3.” “When it’s nice out, it’s fun to come out here with your friends and family and prop up a few lawn chairs and enjoy the movie.”

As the popularity of drive-ins ebbed in recent decades and cinematic technology has evolved, Bill Powell acknowledges it’s been a struggle to remain competitive, requiring him to depend more on creativity than technology.

“We try to develop new ideas to get more enthusiasm and have people wonder, ‘What’s the Georgetown Drive-In doing this weekend?’” he says.

Notable events have included hosting special appearances from both Linda Blair, the possessed child star of “The Exorcist,” and Tony Moran, masked serial killer Michael Myers from the original “Halloween.” On July 31, as part of the theater’s “Fright Night Film Fest,” several iconic horror film stars will visit the Georgetown Drive-In, including cast members from the first “Nightmare on Elm Street,” a more recent Michael Myers, and the actor who played young Jason Vorhees in the original “Friday the 13th.”

Additional efforts to maximize business include hosting fundraisers, like one recently held for an animal shelter in conjunction with a showing of “Marmaduke,” donating concession profits to charities like Relay for Life on designated nights, and encouraging local elementary schools to have field trips at the theater.

“It keeps interest, and, honestly, we have a lot of fun,” Karen Powell says. “We like seeing everyone and meeting everyone, and watching them enjoy themselves.”

But the Powells are not naïve, understanding that as technology advances, they must adapt to overcome these new-age challenges. That said, Bill is optimistic his family business can overcome these “small obstacles.”

“Some of the challenges have to do with going digital and converting all of our equipment to digital,” he says. “Right now, there’s no technology big enough for my main screen, but hopefully within the next year or so, something will come out for places like this.”

Despite their efforts to advance in this digital age, the Powells believe there always will be movie buffs drawn to the magic of the drive-in.