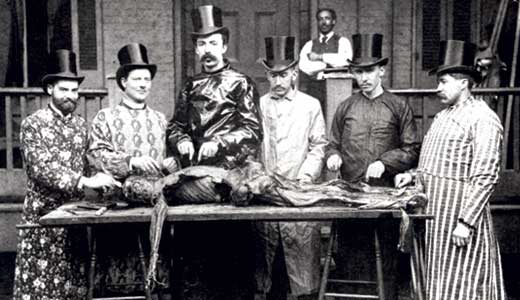 Time and again, it has been proclaimed that once the real truth is found, it often is stranger than fiction. With the array of fictional scenarios created in books, television and movies, that may be hard to fathom. However, one particular section of the Filson Historical Society’s Photography Collection tests the boundary between truth and fiction.

In a collection that holds more than 50,000 photos, it isn’t hard to believe one may find a handful of out-of-the-ordinary images. And for Robin Wallace, associate curator of special collections, it didn’t take much time at all to uncover the bizarre.

“When I started working with the collection, I noticed we had a subject heading in the photocopy files called ‘Human Curiosities,’ and I thought that sounded really odd,” Wallace says. “I wanted to know what photos were in that subject heading.”

As she examined the photographs and negatives, she slowly uncovered the oddities inside. Wallace will present these images Friday at the “Curiosities and Wonders of the Filson Photography Collection” event. Each of the photos filed away in the many storage cabinets in the collection unlock a piece of history.

“The thing that ran through my head first was that I think it’s important to tell the story behind such images, because our understanding of them will have changed,” she says. “The way people regarded such images during the time they were taken is going to be different than how they regard them now in the 21st century.”

That change in understanding and interpretation wasn’t an easy one to overcome, even for Wallace. While it was clear the photos were old and taken during a time when social mores were different, the images never ceased to shock.

“Some of the postmortem photographs are really startling when you first see them,” she says. “We’re not used to seeing that kind of thing on a regular basis now, but it was quite common in the 19th and early 20th centuries. It was common to photograph your departed loved ones. So I think when you see that for the first time, it’s shocking, and you question why somebody would do such a thing. But the way people viewed death in those times is very different than how we see it today.”

The photos are primarily from the Louisville area and include some well-known local spots like Male High School and University of Louisville. These photos found their way into this uncanny collection in amusing ways — like the handful of images from the Male High production of “Polly.” Male was an all-boys school at the time in 1901, and some cast members dressed in drag to portray the female roles.

The images in the Filson Collection are powerful. Not only will they leave a lasting impression, but Wallace believes they’ll serve a much greater purpose. With each image and its corresponding story, a new realization about the past and present will come to light.

“I think a lot of the time we simply view images as visually appealing or look at them as just sort of a nice pictorial history of our region,” Wallace says. “But there’s usually a lot more they can tell us about society in general and about how society changes through the years. If you take time to analyze the different elements of the photographs — ask yourself who made the photograph, what’s the setting, what might have been their motivation behind taking those pictures, what do they tell us about the people or places in the pictures — you can learn quite a bit about social mores and changing views.”

If it hadn’t been for the curiosity of Robin Wallace, perhaps the photos’ stories and truths would have remained buried in the stacks of the Filson.

“I definitely believe truth is stranger than fiction,” Wallace says. “I think we like to think there’s nothing we haven’t seen or heard by now. Here we are in the year 2010, but there’s always going to be some unexplored corner of our own history that surprises us.”

‘Curiosities and Wonders of the Filson Photography Collection’