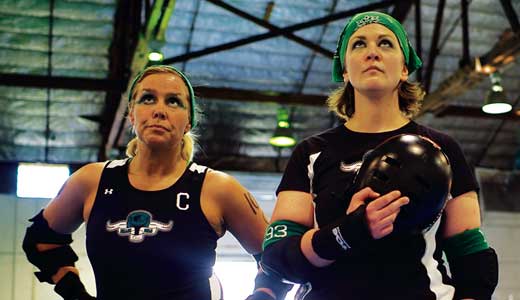 ‘Theatre of the Oppressed’

Augusto Boal, a Brazilian director, writer and politician, believed theater could be used for more than entertainment and artistic expression — it could be a vehicle to give a voice to and empower members of oppressed communities, so he developed a performance style in the 1970s known as Theatre of the Oppressed. This week, the Fairness Campaign and Women in Transition are joining forces and exploring this theatrical form, hosting a workshop and performance, addressing social justice problems, and working out possible solutions. Having held these workshops throughout the state, this will be WIT’s first public performance, so if you can’t make the workshop, you can still see it in action Saturday night. —Jane Mattingly

A pirate walks into a bar and the bartender asks, “Sir, do you know there’s a steering wheel sticking out of your pants?” The pirate replies, “Arrrr, it’s been drivin’ me nuts.” Time to dust off the patch and practice holding your rrrrs — the Frazier History Museum is hosting Scallywags’ Sunset Soiree, a cocktail party, on the rooftop of the Main Street museum Thursday night. There will be live music by Dem Reggae Bon and plenty of drinks and food to keep even the nastiest wench content. The party is in conjunction with the museum’s exhibit “Pirates: Treasure & Treachery,” which is a collection of authentic pirate treasures and artifacts. Pirate garb is encouraged. Leave the kiddies at home. —Sara Havens

With the season winding down, withdrawal sufferers might consider “Roller Derby,” a photo show going up Friday. Journeyman photographer Jeff Randall rode along with the Ohio Roller Girls for their ’08-’09 campaign, capturing not the expected bumps and bruises, but rather the community and character of the sport. A master’s candidate in social work at U of L, Randall compares gaining access to this tight-knit sect of jammers and blockers with winning the trust of any other guarded segment of society. Of the women in this photo essay, Randall says, “The Roller Derby world perfectly mirrors the larger community it’s sprung from: It’s gay and straight, blue and white collar, moms, folks of different races, etc. As an athlete, social worker and artist, I continue to look to these women as role models for how a society can operate and thrive.” — J. Christian Walsh

Alt-rock not your bag? One of the few alternatives to Forecastle this weekend is Cincinnati power trio Sonny Moorman Group. Moorman was a runner-up in the solo/duo category at the 2007 International Blues Challenge, and on this tour, his guitar chops and vocals are backed by bassist Dennis Williams and drummer Dave Fair for a mix that is at once straight-up old-school rock and blues swagger. They’ll join The Predators, Hellfish, The Amazing Soul Crackers and others for the Blues-N-Barbecue Festival. Admission is $6 before 6 p.m., $9 after. Parking is free. —Jess Mahanes

Since being the runner-up in the debut season of NBC’s “Last Comic Standing,” Ralphie May has become one of the most beloved comedians on the circuit. Not only on a nationwide scale, but locally as well — this will be the fourth time in less than two years May has performed in Louisville. His raw, unfiltered sense of humor makes him “Just Correct,” as opposed to politically correct. When it comes to his view on the world, there’s nothing that’s off limits for him to lampoon, whether it’s the death of Michael Jackson, the Siegfried & Roy tiger attack, or the gulf oil spill — it’s all up for grabs. He’ll be performing this weekend at The Improv. —Brent Owen

My inability to weave picturesque prose toes the line of embarrassing and only solidifies my respect for a poet’s ability to work the word loom. This week, two poetry readings offer a feast of prose from homegrown writers. Friday, an event hosted by Green River Writers at the Rudyard Kipling starts off with dinner and an open-mic session for those wanting to share their verse. It features poets Sheri Wright, Sherry Chandler, Gail Chandler, Harriet Leach, Jean Tucker, Christine Strevinsky and Alan MacKellar. If that doesn’t satisfy your craving, there will be a book signing Sunday at Carmichael’s. Selections from new material by Wright, MacKellar and (Sherry) Chandler will be included, as will poets Ed August and Don Ray Smith. Both events offer a chance to meet the writers afterward and perhaps inspire a budding poet. —Rosie Haney

When reading classics like “Pride and Prejudice” or “Mansfield Park,” do you ever feel the sudden urge to celebrate their literary impact on society?

Austen was basically the 17th century’s version of a Spice Girl: She was forward thinking, and while her books predate chunky boots and clothing made out of the British flag, she did immortalize her time, hence this festival in her honor.

The silent auction with Austen’s books and other movie and story memorabilia scratches the surface of what the event will offer. Booths will sell period clothing. Both days will hold an afternoon tea comprised of four courses and hands-on workshops. Educational demonstrations will also be at a constant pace, and Kim Wilson will speak on her books influenced by the author. Girl power! —Jess Mahanes

The 21st annual Brightside/Coca-Cola Volleyball Classic should be a sight to see. Close to 300 teams are expected to participate at all levels of skill. And it’s all for a good cause — the tournament raises money for Brightside’s city beautification projects. If you’d like to see a few matches in the sand, stop by Baxter Jack’s (426 Baxter Ave.) to see the sand divisions compete, or head to Seneca Park and enjoy matches from the early morning until the sun goes down. A highlight of the weekend will be the Mayor’s Players vs. the Media Team that will have your favorite (or not so favorite) political and television personalities from around the city. LEO’s Sara Havens and Jonathan Meador are signed up, and the match begins around 1 p.m. on Saturday. Sounds like a good laugh. —Whitney Spencer

Chao Auditorium, U of L

In the African nation of Uganda, homosexuality is no laughing matter. “I have been arrested, thrown out of houses by landlords, harassed by angry mobs, denied by family, excommunicated from church and discriminated by employers.” These are the words of Val Kalende, a 29-year-old journalist and LGBT activist visiting Louisville from Uganda, where homosexuality is not only scorned, but illegal. Her country now is considering passing hostile anti-gay legislation that would make life sentences and the death penalty acceptable ways to deal with its gay community. Serious stuff, I know. “The one thing that keeps me going is the love and hope I have for the struggle and the progress we have made as a group of young activists in my country,” she says. “I know I may not be here to see freedom, but I know it will be.” The World Affairs Council is hosting the discussion. —Pam Swisher

Derek Miller wasn’t finished with distortion following his tenure in Florida hardcore group Poison The Well; he was looking for a different way to use it. The guitarist/producer found a willing foil in Alexis Krauss. As Sleigh Bells, Krauss’ cheerleader vox juxtapose Miller’s overdriven Danelectro-and-beat-machine rhythms, and their debut Treats is a lesson in knowing what you have: “Infinity Guitars” is the demo with a new ending, and “Crown on the Ground” has a new kick-drum sample, but self-production might be the way this project stays. Expect volume. “A lot of monitor engineers will say something’s wrong, everything’s clipping,” says Miller, who’s now become a soundman’s therapist, repeating, “No man, that’s the way it’s supposed to sound.” For a chance to win a pair of tickets, e-mail [email protected]. The winner will be drawn and contacted by 4 p.m. July 12. —Mat Herron

The interior of the Kentucky Museum of Art and Craft is covered in glass, and they couldn’t be happier about it. Especially when it’s the work of top-tier artists Tom Philabaum and Mark Peiser. Philabaum’s latest work, The Rock Series, looks like it sounds. It came about because he wanted to make glass that was not in a vessel form. He received the 2010 Glass Art Society (GAS) Lifetime Membership Award during its recent conference in Louisville. Peiser has been working in glass for more than 40 years and is one of the founders of GAS. It recently bestowed upon him the 2010 Lifetime Achievement Award. He calls his latest series “Palomar.” KMAC also is showing glass jewelry by 33 international artists. —Jo Anne Triplett

‘Wheel of Fortune’ by Anne Peabody

Louisville has had some foul weather in the last couple of years. I wonder if we’ll talk about the 2009 ice storm or the 2010 heat wave the way people reminisce about the tornado of 1974. Artist Anne Peabody remembers it. “I wanted to look at the clash between devastation and beauty and the unexpected consequences of disaster,” she explains. “I started from my own childhood memories of the 1974 tornado, which left my house untouched but my neighborhood devastated and my yard filled with other people’s possessions.”

The sculpture is composed of wood objects Peabody carved to resemble items that swirl inside a tornado, such as flashlights, dolls and eggs. She also added found objects of glass. The resulting twister is 18 feet high and 13.5 feet wide. —Jo Anne Triplett